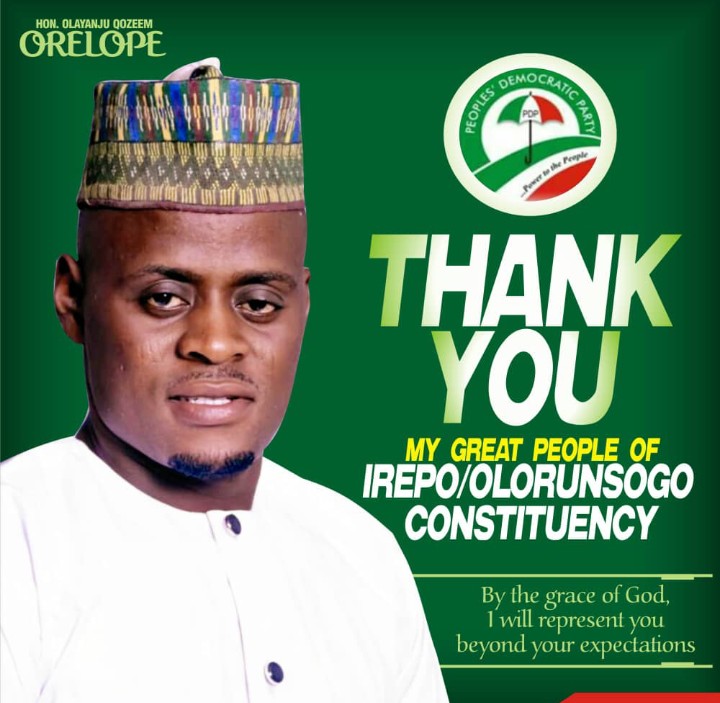 The newly elected House of Assembly member from Irepo and Olorunsogo state constituency, Hon. Hon. Qozeem Olayanju has ascribed the victory of Engr. Oluseyi Makinde as a deserved one which revealed the voice of the masses.

In a press release personally signed by Hon. Qozeem Olayanju, he said, the victory in last Oyo State governorship election was a pay back for Engr. Makinde kind heartiness, as his benevolent attitude attributes him to be man of masses, thereby the victory was a reflection of his good deeds in the state. Hon. Qozeem Olayanju advised the newly elected governor to look ahead to repositioning Oyo State for good.

It is indeed a victory for all lovers of true democracy and indeed the good people of Oyo State. This is a litmus test for our nascent democracy.

Nigerians are showing we are coming of age and the stage is gradually looking brighter for future elections.

Engr. Oluseyi Makinde, your benevolent heart had paved way for you.

We will also want to appreciate the OYO state INEC led by Mutiu Olaleke Agboke, the security agencies and all those that ensured peace and orderliness towards the success of this historic election “.

Some Individual Are Trying To Thwart Nation’s…

Oyo APC Should Apologize For Its Looting, Failure Not To…