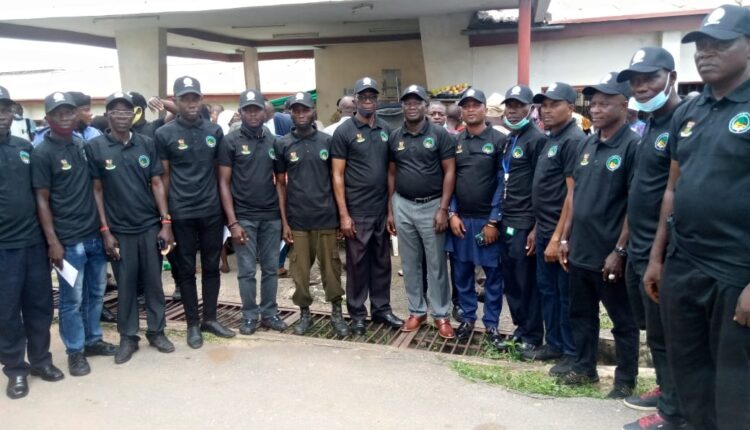 As part of activities marking his 100days in office, the executive Chairman, Ibadan North West local government, Hon. Ramon Adepoju has inaugurated local security outfit to reduce crimes in and around the council area.

Adepoju also distributed compendiums and exercise books to pupils in all public primary schools across the local government.

Performing the symbolic inauguration at Onireke headquarters of the council, Hon. Adepoju explained that the exercise is centred on two major cardinal pillars of the present administration of Engr. Seyi Makinde, towards improving standard of education and providing adequate security of lives and property in the grassroots.

In his remarks, Commissioner for local government and chieftaincy matters, Chief Bayo Lawal, who noted that the council has become a pace setter for others, urged the pioneer corps to be dedicated to protection of people and shun abuse of power.

Also speaking, the chairman, Oyo State Universal Basic Education Board, Dr. Nureni Adeniran assured that the government will continue working to turn around schools infrastructure and standard of education in the state.

The Head of the newly inaugurated local security outfit, Retired Major Ramon Afolabi, pledged that the corps will work diligently with other security agencies in the state to ensure people sleep with their two eyes closed.

Dignitaries at the event include; Olubadan of Ibadanland, Oba Saliu Adetunji, represented by Asipa of Ibadanland, Oba Eddy Oyewole, Special Adviser to Governor Makinde on security, CP Fatai Owoseni (Rtd), heads of security agencies and other stakeholders in the security sector.

Highlight of the event was handing over of Patrol vehicle, motorcycles, and other security gadgets to the newly inaugurated local security outfit.

LG POLL : Oyo Govt Restricts Movements Between 6am To 3pm On…