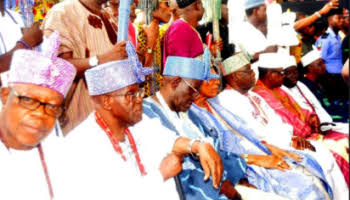 The Court of Appeal in Ibadan on Thursday struck out a motion filed by Sen. Rashidi Ladoja, challenging the powers of Gov. Abiola Ajimobi of Oyo State to gazette and approve “ beaded crowns and coronets” to 48 Obas across the state.

Ajimobi appealed the Jan. 20, 2018 decision of Justice Olajumoke Aiki of the Oyo State High Court, which set aside recommendation of a committee of inquiry on the review of the 1957 Ibadan Chieftaincy declaration, which recommended crowning of 21 new Obas in Ibadanland.

The three-man panel of judges headed by Justice Nonyerem Okoronkwo, held that the thrust of the relief sought was invoking the court to set aside the gazette which approved the crowing of the Obas.

The court which has Justice A. Talba and Justice F. Ojo as members, held that the gazette which the motion seeks the court to set aside was not the subject matter at the lower court.

Okoronkwo said dealing with such issue at this point may involve dwelling into the main appeal.

“We refuse to entertain the issue and urged the appellant to incorporate it in the main appeal and the motion is hereby strike out,’’ Okoronkwo said.

The judge adjourned the matter until May 27 for hearing of the main appeal.

Ajimobi set up a commission of inquiry headed by Justice Akintunde Boade, to review the 1957 Ibadan Chieftaincy declaration and to make recommendation.

Osi Olubadan, Rashid Ladoja went to the Oyo state High Court to challenge the composition of the committee and to set aside their report and the lower court grants his request on Jan. 20,2018.

The Governor on April 26, 2018 after the court ruling approved the beaded crowns and coronet for 48 Obas across Oyo State including the Ibadan’s recently crowned 21 Obas and other traditional rulers.

The governor gazette the approval in line with section 28 (1) of the Chiefs Laws of Oyo State and with this gazette 26 Obas would wear beaded crowns while 22 would wear coronet.