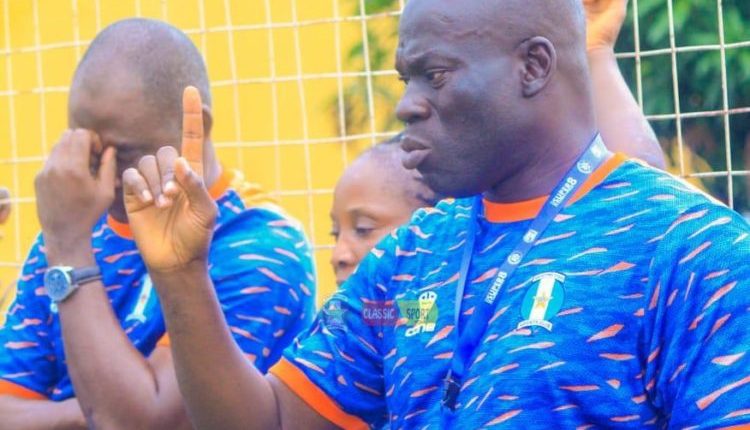 After almost 9 years in charge of the Shooting Stars Sports Club of Oyo State, Edith Agoye chose to step down as Head Coach.

According to Agoye, ” After 9 years as a coach, five years as the head coach in which we gained promotion back to the NPFL and maintained our premier league status, l have decided to leave my position as the head coach of the club.

“l feel it is time for me to leave Shooting Stars Sports Club, 3SC, in pursuit of new challenges.

He however thanked the Oyo State government for the opportunity to lead the South West club, he also extended his gratitude to God, family, 3SC management, fans, supporters and other stakeholders who stood by him during the thick and thin.

“I want to use this opportunity to thank the Oyo state government led by the executive governor Engineer Seyi Makinde for giving me the privilege to serve, and for all the support given me during my stint with the Oluyole warriors.

“I want to also thank the ministry of youth and sport, the Oyo state football association, the Oyo state sports council, the IFA, the management and staff of 3SC, and all the fans, supporters and Supporters club of 3SC.

“I also want to thank my technical crew and support staff, numerous stakeholders and all the players that played under me during my tenure with Shooting Stars.

“And lastly my gratitude goes to God, my wife and children, for standing by me during my tenure with 3SC.”

Edith Agoye joined Shooting Stars’ coaching crew in 2013 as an assistant to Franklin Howard and the team won promotion to the NPFL. After that, he was transferred to the feeder team and later promoted back to the team in June 2016. He was the assistant coach to Gbenga Ogunbote in the NPFL.

The following season, he was the head coach while Coach Fatai Amoo was the technical adviser, that was in the 2016/17 season that 3SC got relegated. At the end of that season, he was confirmed as the substantive head coach, in November 2017. He has been in that position till he resigned last night.

Edith Agoye played for Shooting Stars in their glory years and scored a goal in their 1995 FA Cup final match against Katsina United at the National Stadium in Surulere, Lagos. He left to play abroad for about five years before rejoining the Oluyole Warriors as a coach in 2013.

DPR Seals Off Filling Stations For Selling Above 165 Naira…