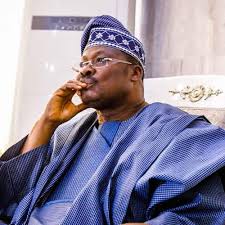 The immediate past Governor of Oyo State, Senator Abiola Ajimobi, has remained Covid-19 positive two weeks after being admitted at the First Cardiologist and Cardiovascular Consultants Hospital, Lagos.

Ajimobi’s wife, Florence, was however, discharged from hospital earlier.

The PUNCH learnt that Ajimobi, who is the Deputy National Chairman (South) of the All Progressives Congress, had been hospitalised since June 2, 2020.

He was said to have been confirmed positive and was managing the situation at home before the illness worsened and he had to go to a hospital.

A source close to the family said the former governor had an underlying ailment which was not unusual for men his age.

He said, “The former governor has been in hospital for two weeks and his condition is not getting better but we are hoping for the best. The irony is that the person whom we believe he contracted the disease from has been discharged.

“However, the former governor has an underlying ailment which is slowing down his recovery. We hope he recovers soon.”