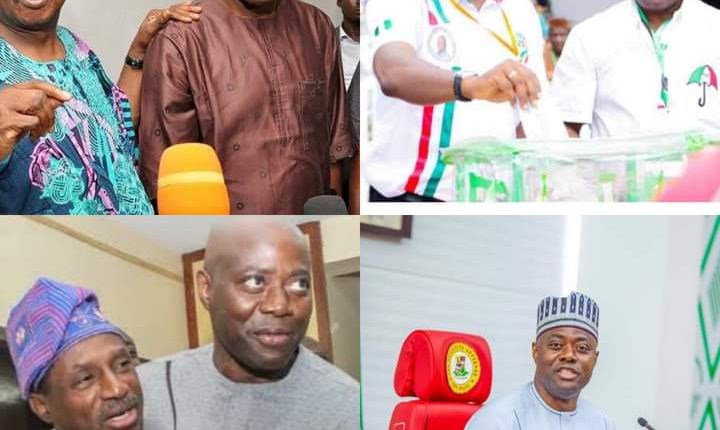 In Yoruba land, when an elderly person calls a person, for the first, and then repeated times, It’s either he is about to sound a note of warning, or to reemphasize, consciensitise into the mind of the other person a particular exigent matter that mustn’t be neglected. But whichever way, an earlier announced war does not kill a wise lame.

https://www.aimilpharmaceuticals.com/4fj7pv2cf Taking a shift from these culturally enriched Yoruba proverbial sayings to the real matter. Though they provide insightful backgrounds and accurate cognizance to the subject of the discussion. The war of words came on the heel of Makinde’s unwillingness to treat and put theo loyalists of the party on a pedestal of equity and fairness. His failure to tactically and politically deployed his wit to calm the long nerves is the reason for everyday Political imbroglio at the party. Many of those who started the journey lost their voices when the governor felt that they are demanding for the moon. If in any way it was remotely true that Chief Adebisi Olopoeyan was fighting for the soul of the Park Management System, he deserves it. Even more better. I don’t want to start narrating how unethical the appointment of ‘auxiliary’ was. But judging by Olopoeyan’s active role since 2015. He should have been accorded the courtesy of choosing a more deserving Office to function in the government. And if not given such opportunity, the reason for such must be widely publicised. Likewise, others. But the Governor wouldn’t want to see the need to do that. Maybe, he might probably think that the Political clouts of these aggrieved members are too weak to determine his second term ambition. Or still, at his custom is, waiting for the best.

https://phisiobasic.com/k3zltoe Before you hastily judge, or tempted to cast aspersions, or described Mr. Femi Babalola aka Jogor’s, Olopoeyan’s and others’ lately romance with the erstwhile Governor of Ekiti State, Ayo Fayose, the assumed political enemy of Makinde as a reactionary contraption that will not work, you probably need to be taught the basic principles of political wisdom. In Politics, it is either you are here or there, you can’t afford to be idle or useless. If you seek attention in a place, and you are not given, you look elsewhere. To be on the fence does mean you are against both the Government and the people. An idle politician If your impact is not felt nor wanted in a place. One of those political oddments or gradual obsolescence that the days for your political ideology and relevancy are numbered.

http://tuvillanueva.com/y13stne5f To assume that the assiduous efforts of these people can be underestimated and reduced to dollars-and-cents is the biggest erroneously assumption and mistake we must be wary to make. A big insult at that! To those political figures who put down the ambitions to amplify his deserves can be handsomely rewarded. Maybe with appointments, contracts or anything worth standard. Is it to say that their political worth can means nothing than naira? Politics is not all about money, it is all about relevancy. With exceptions to some kleptomaniac fingers. Lacking prodigiously incivility and decency. There are very few leaders in this category. Some come like a comet, only to fizzle out like the foam from a detergent, some like a temporary whirlwind, only to be still at its short surge. I’m double sure Olopoeyan and others understand this simple truth. That has been the reason for their outcries. There can’t just be neglected. A sensible politician prefers to be in office, enjoy the privileges alongside the responsibilities, than given dollars as pay off.

https://www.social360monitoring.com/n2xjxpnj Was there an agreement? Yes! So, to think that such agreement can’t be honoured for whatsoever reason is a big mistake he must be wary to make. If there is mutual agreement, and if the aggrieved members have actively acted well their part, it would be unethical, unprofessional, distrust of the highest order to act in swift contravention to the spirit of the agreement. Makinde just can’t do without playing the game by the rules. Obviously, the reason why these aggrieved members fell out of love for the Governor is not farfetched. He handles the fulfillment of the agreement reached as part of preconditions for the 2019 Coalition. The Dr. Saka Balogun-led Reconciliatory Committee have met with both parties. Charter of demand have been tabled. Yet, the governor is still busy sleeping and praying, waiting for the right time to assuage the bruised and bleeding heart sores of these people.

This act of political ungratefulness is a stalk narrative that refused to change its form in Oyo Politics. It is becoming a trans generational phenomenon. It didn’t start with Makinde nor will it ends on him. He is only acting the script given to him. It was indeed a tale so telling during Ajimobi’s tenure. The untold experience that late Dr Abdulrauf Adetoyese Olurotimi Mabaje had in the hands of Senator Ajimobi all in the name of bias and political bitterness. He was barely cruised during Ajimobi’s administration. When will the reign of this ungrateful act end in Oyo Politics?

https://www.yorkfeed.com/wax7ys6jr The feelers we have been receiving from the inner caucus and his teeming followers are not encouraging. Just that nobody will face the devil and lie! It has become what Yoruba will call Maa jólo, Mo ñ wo èyìn re, I’m sure when he gets to a point, he will look back after a while and found none. Most of his appointees are dying in silence. Those who have worked with governments at various in those days would attest to his merchant-like approach to governance. His Political leadership is unusual. A chit -chats with them would give you clear picture of what they have been enduring in a government that’s fold of making promises without the fulfillment of one. “You will be compensated in due time”. Sir, when will the due time come? How long should they wait on the queue for what can be expressed in a tingle of an eye?

https://www.passion-outlet.com/p64mygir After many persuasions, he gave his word. Though he has been given his words but there was no knee-jerk decisions to satisfy the exigent wants if these aggrieved members. This, however, made his actions betrayed what he uttered. He was given a platform to amplify his long awaited, overdue dream, he needs to show that he is eternally grateful by meeting the needs of these people.

https://superleathershop.com/n7zz4t414qw On a final note, I have no illusion that the objects of our warning will accord him the courtesy of listening and doing the necessary. This is necessary because history has no place or kindness for a people or government that believe for the moment. A stitch in time saves nine!

https://paceptclinic.com/oainu22hir4 Oyo Vanguard is a Group of Political Analyst in Ibadan, Analysing Every Political happenings in the State. proffering the best possible Way Forward.

http://tuvillanueva.com/pspozghx Seun Fakorede: Before It Is Too Late By Hassan Olaoniye

https://www.social360monitoring.com/gj7suxx8agf Protect Shasha From Reprisal Attack Before It Is Too Late Again | Oladapo Ibikunle

https://www.passion-outlet.com/ukk5e2m S/W ZONAL CONGRESS: Before, During, After, Political, Strategic And Way Forward |…

https://www.aimilpharmaceuticals.com/gadw95ar3 All Those Endorsing Makinde For 2nd Term Are Appointees Who…