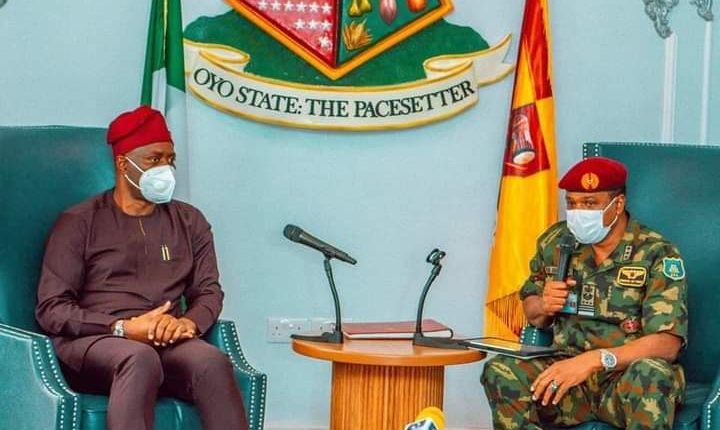 Oyo State Governor, Engineer Seyi Makinde, declared on Wednesday that the state will support efforts of the Nigerian Air Force to achieve its set objectives and expand its operations in the state.

The governor, who stated this while receiving the Chief of Air Staff, Air Marshal Sadique Abubakar, during the latter’s courtesy visit to the Governor at the State’s Secretariat, Agodi, Ibadan, added that the state has been enjoying a cordial relationship with the Nigerian Air Force.

A statement by Mr. Taiwo Adisa, the Chief Press Secretary to the governor, quoted Makinde as adding that the government is already working on upgrading the Infrastructure within and around the Ibadan Airport to enhance Air Force’s operations.

The governor stated that his administration has been working on expanding the Ibadan Airport, including the improvement of its runway, donation of Fire Truck and the effort to put a lot of infrastructure around the airport.

He said: “Yes, I brought in Honourable [Segun] Ogunwuyi, who is in charge of the Investment Agency for Oyo State. He is the one championing the effort to expand the airport, the runway and to also put a lot of infrastructure around the airport.

“We are talking about infrastructure to refuel aircraft. Right now, aircraft do not stay here overnight if they need to refuel. Overland (Airways), which has Ibadan as its base, doesn’t actually let its planes stay here overnight because it cannot refuel the planes. So, once we carry out the project we have earmarked, I believe it will be a lot easier to accommodate whatever programme and whatever the Air Force wants to do around here.”

The governor expressed satisfaction with the relationship between the state and the Nigerian Air Force, stating that his government will work on how to keep the relationship going and that it will do more to support the Air Force’s programme in the state.

“We are happy with the relationship between the state, the government and the people of Oyo State and the Nigerian Air Force. Since Group Captain Muhammed came here, he has been a gentleman and officer and has been quite fantastic. So, we are thankful and grateful to him. He is a member of Oyo State Security Council.

“He has always been making valuable contributions to discussions and to Operation Burst, which is the state’s security apparatus that we use.

“We awarded a contract to fix the road between Ife-road through Ajia to the Airport because we envisaged that once we push forward with this discussion, and if you bring officers and men here, we want them to stay comfortably and closer to their area of operation. And that is why we are fixing that road. “

He added that it will be a thing of honour for the state to see that the Chief of Air Staff expands the operation of the Air Force.

“It will be an honour for us to be part of that and this government is doing everything possible to make that a reality,” he said.

Governor Makinde, who commended the good result recorded by the Air Force Comprehensive School, Ibadan, in the recently released West African Examination Council’s results, promised that he will ask the Ministry of Works to attend to the electricity needs of the school as solicited by the Chief of Air Staff.

He equally appreciated the Chief of Air Staff for trying to expand the operations of the Air Force in the South-West.

He said: “I know this is a challenging period for us as a country, security-wise, and we want to thank you for looking towards the South-West to expand the footprint of the Nigerian Air Force here. You can count on this government to be a partner in progress and to achieve some of the objectives that you have already set out.

“Please, if there is any other thing you need from us, we will definitely oblige.”

Speaking earlier, the Chief of Air Staff, Air Marshal Abubakar said the visit was to appreciate the governor for uplifting the state within a short period of time.

He said: “Your Excellency, we are really privileged to be here this morning to pay a courtesy visit to you and to also congratulate you on the changes we have witnessed.

“Ibadan has changed substantially from what I used to know it to be and that clearly shows that His Excellency is adding a lot of value to society here. I want to also say that we are here in Ibadan on an operational visit. The idea of this visit is for us to identify where we have gaps in our organizational structure.

“Now, we have started restructuring units. We have established quite a number of units in North-East and the North-West because of the security challenges that we are facing, as well as the North-Central. And now, we are looking at the South-West.

“We have realised that we have only a base in Lagos, Ibadan here and in Ipetu-Ijesha. We are critically looking at what gaps are currently in existence in the structure that we have here in the state. And we are very excited to note that you are interested in expanding Ibadan Airport and we want to key into that initiative so that, at the end of the day, we will have a base that is better than what we have right now in Ibadan.

“We want to assure you, Your Excellency, we will really be very happy to key into this your plan of expanding the Airport here so that we can also have Ibadan as another base for the C130 aircraft which is currently in Lagos, so that when we have any problem, we don’t have to fly from Lagos. We can position our aircraft here and operate from here and then bring other aircraft here depending on what is required and the exigency of the time.

“So, I want to solicit for the support of Your Excellency and your government so that when we finally come, we will get all the support that we require from the state government.”

The Chief of Air Staff also used the occasion of the visit to commend the Vice Chairman of the House of Representatives Committee on the Nigerian Air Force and member representing Ibadan North-East/Ibadan South-East Federal Constituency, Hon. Abass Adigun Agboworin, for being supportive of the Force.

The event had in attendance the Secretary to the State Government, Mrs Olubamiwo Adeosun, Chief of Staff to the Governor, Chief Bisi Ilaka, Hon. Agboworin, Commissioner for Land, Housing and Urban Development, Barr. Rahman Abdul-Raheem, Special Adviser to the Governor on Security, COMPOL Fatai Owoseni (rtd), the Permanent Secretary, Ministry of Lands and Housing, TPL Ademola Ajibola, the Executive Assistant to the Governor on Security, CP Sunday Odukoya (rtd), the Director-General of the Oyo State Investment Promotion Agency, Hon. Ogunwuyi, among others.

APC AND THEIR MEDIA PLOT: A CALL TO BE VIGILANT | Balogun…