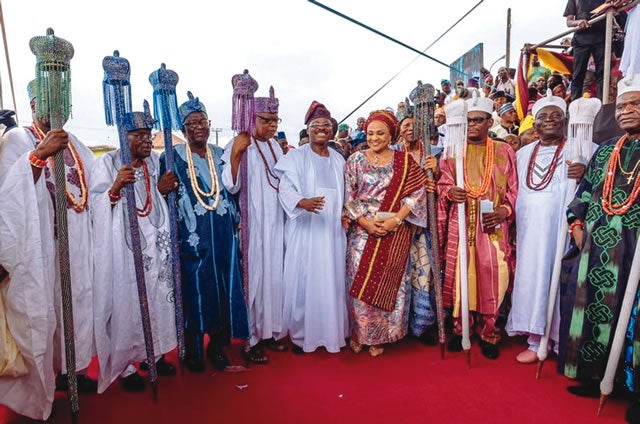 Fifty-three months after they were elevated and coronated as crown-wearing obas in Ibadanland by former Governor Abiola Ajimobi of Oyo State, a State High Court judge, Justice A. Aderemi on Tuesday sets aside all gazettes to the effect.

In granting the terms of settlement jointly filed by the State Government and the claimant who doubles as the Olubadan of Ibadanland, High Chief Rashidi Ladoja, Justice Aderemi said since the parties had met and agreed, he was left with no option than to set aside the gazette.

Ladoja had in 2018 won a landmark judgment which quashed all the processes that led to the coronation of his colleague-high chiefs and some Baales numbering 21 on August 27, 2017, by Ajimobi.

Ajimobi who was not satisfied with the lower court’s judgment, appealed same; which was still pending as at the time May 29, 2019, when he left office.

His successor,  Governor Seyi Makinde recently set the ball rolling for an amicable resolution of the dispute which pitted all the 21 ‘kings’ against the Olubadan of Ibadanland, Oba Saliu Adetunji since 2017.

The government confronted the court of appeal with terms of settlement and the latter on August 23 this year referred parties in the controversial coronation of the kings to a lower court.

On Tuesday, the State High Court 2 in the suit no. M/317/2017, between Ladoja as claimant and Governor of the state with retired Justice Akintunde Boade for himself and on behalf of all members of the Judicial Commission of Inquiry on Olubadan chieftaincy, as defendants, put seal on the terms of reference brought before it.

The judgement read by Justice Aderemi reads; “that all the gazettes affecting the chieftaincy laws of Ibadan land particularly gazette Nos.14 Vol.42 of 23rd August 2017;15 Vol 42of 24 August 2017 and 3 Vol 43 of 29th March 2018 and the subsequent elevation of High Chiefs and Baales in Ibadanland as Obas during the pendency of this suit be and are hereby set aside.

“That the right to wear beaded crowns and coronets granted by the state government during the pendency of the suit, are hereby revoked.

Stall Negotiation : ALGON Is Negotiating On Behalf Of…