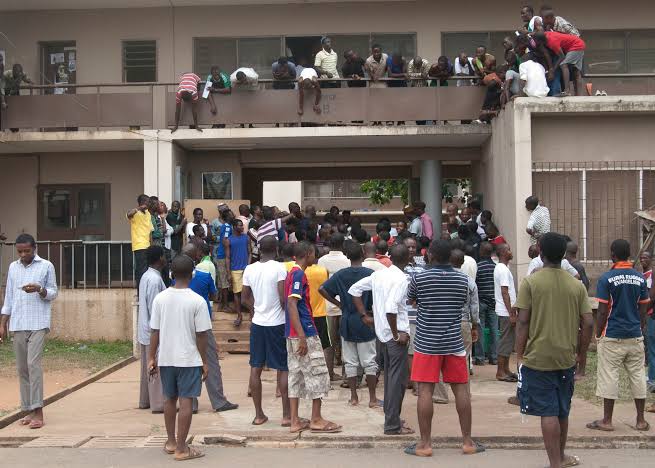 University of Ibadan, UI as it is fondly referred to, is the first University in Nigeria, a citadel known for academic per excellence
since establishment but the student”s welfarism in recent years
is highly questionable.

Rots in the hall of residence of the premier university of Ibadan is becoming a threat to the academic performances of the students.
Besides being overcrowded, many of the hostels lack basic amenities.

Some students read under the street lights powered by solar energy for lack of constant power supply while many sleep on the bare floor for the fear of bed bug.

The toilets facility across the hall of residence in the institution visited by our correspondent, are eyesore while the porous security architecture of the campus usually affect free movement of the students at night.

Despite the challenges facing the students in the hostels the management recently increased the fees from N14,000 to N30,000 per student.

Some students afraid the terrible condition of the toilet facilities are capable to cause epidemic on campus, owing to the uncomfortable lifestyle of the students on campus.

Our correspondent reports that the cafeterias in all the halls are empty without chairs and table to make students comfortable.

However, our correspondent observed that almost all the structures are well painted but students described the structures as a “fake aesthetics” and “old wine in a new bottles.”

Visit to the Obafemi Awolowo, hostel, which was said to be the largest hostel, Sub Sahara Africa, built in 1986, was stinking amidst poor ventilation and bushy environment.

Recently armed robbers laid siege to the hostel for hours and made away with female students laptops, phones, cash and other belongings, just as they injured two.

A security official attached to the hostel, was reportedly tied while the robbery lasted.

Investigation however revealed that following the outcry that followed the attack and its deplorable situation, renovation works had commenced.

A student, who gave her name as Kemi Oguntade was seeing complaining to a supervisor of the need to carry out electrical and other minor works in her room.

The population of the inhabitants, according to our findings, was put at over 2, 000 on inception in 1986 but today, barely 1, 500 students are residing there.

The hall is isolated at the extreme end of the campus, thus making the Awo Hall susceptible to invasion by armed robbers.

Undergraduate students residing in the hostel, are paying N30, 000 while postgraduates are charged N50, 000 per session.

One of the students said that, “the security lapse you cited was an unfortunate development and the management had fortify the hall with more security personnel and other logistics that I won’t disclose, to forestall a future recurrence.

“You will also notice that renovation works had also commenced there and we intend to give our students residing there best of facilities to make their stay there ‘a home away from home’,” he added.

At the Queens Elizerbeth’s hall which accommodates female students, the students complain of poor power supply which according to them affects availability of water supply.

A student who crave for anonymous said; “we are having challenges of power supply. Many time, we find it difficult to pump water and resulting to drawing water from the well. Before now, the toilets are terrible but they have repair it partially,” he said.

On how many students are accommodating in a room, she said the big rooms are having eight students while the small rooms accommodates three students.

On the amount paid by each student in the current session, she said “before now, we used to pay N14,000 per student but now, it has been increased to N30,000 each, but sincerely, they have repair the facility partly. Unlike before when the toilets are bad, they have been improving on the services since they increased the fees.

“Though we normally have water running but some times we fetch water from the well, which at times make many students get tired of their stay in the hostel.”

At Mellanby Hall, the situation is worse as many of the students complain of security lapses, invasion of bed bug in their rooms, indiscriminate and incessant punishment for crime they didn’t commit.

A student who simply identified himself as David said the unstable light, the terrible condition of the toilet facility, the bedbug is the major problem in the hostel.

He said; “the light is not stable at all and as a result, we have shortage of water. I have seen a student reading under a streetlight powered by inverter. At times some of the executives contribute money to buy fuel for hall’s generating set for people to read, charge their phones and laptop.

“The issue of toilet are partially solved because they have done at least 40 percent of the toilet in the halls but many are still very bad. The source of the Bed bugs is the reading room. Though I cannot blame the management for that because they formigate the hall every session but the problem continued.”

When our correspondent visited the Tedder hall, for both male and female students, the story was the same as the students said the management did not make any renovation before painting the structure.

A 400 level student of Anthropology who refused to mention his name said he didn’t believe in writing stories on the terrible facilities in the institution because several articles written on the institution didn’t yield any result.

The young man who said he is a friend to students in all the floors lamented that the hall is the worse in all the hall of residence of the premier university.

“It is just painting without doing anything renovation. Toilets are bad. Bathroom and light are not good at all. No bunk for bed.  When they don’t know who committed offence, they impose the fine on the entire students to pay, even when they make more than the damages that occurred. No security on campus because halls were raided after the school management stopped Okada operation on campus. We know that the newly introduced Keke Napep are being owned by the powerful men in the school.

“The only question yet to be answered is why erratic power supply usually occurs during examination? he queried.

One of the students who spoke on the condition of anonymous said “We go to faculty at times for toilet because our toilets are nothing but danger. It capable of causing epidemic on campus. Like me as a Muslim, I go to mosque to defecate most times.

“I know our people find their ways to deal with those challenges but it is not the best. The university of Ibadan that was the best in those days are nothing but fake aesthetics values today,” he said.

Reacting to the terrible condition of the halls, the Dean of Students Prof. Keye Abiona said the federal government has not been supporting in maintaining the halls.

He said he discovered that many of the students usually bring bedbug to their hostels while returning to school after holidays because it is tradition to formigate the halls before the students resume.

He said; “The issue of light is general in Nigeria and not peculiar with the University of Ibadan. We are paying N40million to the IBEDC every month.

On the issue of water, if you observe, we use boreholes in all the halls and we have generators to pump water for them.

“I don’t believe you visit all the halls because there are improvement in recent time. Also, you have to consider the population of the students in the hostels.

“If you also observe, you will see that the work is ongoing and we cannot conclude that the halls are terrible until they complete the renovation work.

“The problem with our halls is lack of fund. Since 1980s, the federal government has not been giving us fund to manage hostels you can quote me anywhere.  You will also observe that we have painted the halls, it is gradual process.

“On the bedbug, you can confirm from the students, we used to fumigate the halls every session before the students resume for new session but I think the problem is the fact that those students usually bring bedbug whenever they are coming to school;” he said.