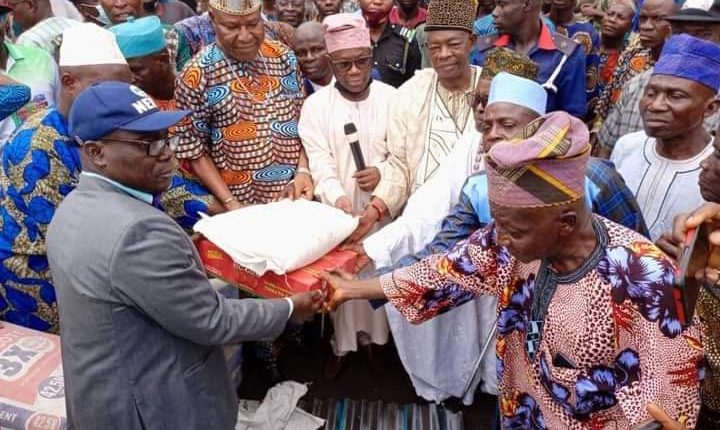 GNC made this known in a statement issued in Ibadan.

The group also urged the Automobile Spare Parts Dealers to direct their appreciations to all the lawmakers representing the state at the federal house of representatives in Abuja.

According to the group, the relief materials was given through the efforts by the 14 federal lawmakers against claims by Sen. Kola Balogun,

The GNC, in a statement by its co-conveners, Alade Ayobami and Christina Adekanmbi in Ibadan, on Thursday morning said: ” On behalf of Oyo state residents and Araromi Agodi Automobile Spare Parts Dealers Market, our expression of gratitude goes to the Federal Government, and the National Emergency Management Agency (NEMA) for the provision of relief materials  to the victims of Araromi Agodi Automobile Spare Parts Dealers Market inferno, which occured on 2nd April, 2021.

” Our group, read and viewed pictures on social media yesterday on how Oyo South senatorial district senator, Kola Balogun claimed to have written three letters to the authorities concerned about the Araromi Market inferno and his frequently in touch with them on the need for the intervention without deem it fit to recorgnise the noticable efforts of all the Oyo federal lawmakers at the Green Chamber.

” Though, the relief materials came longer than expected but it will still be on record that, the federal government rendered an assistants to the victim of the inferno, moreso, our group, which is not a political, needs to make some clarification on the said facilitated materials and the real facilitator for the good people of Oyo state and the Spare Parts Dealers Market at Agodi gate to know those who truly merit the glory for the safe delivery of the materials to victims.

The joint motion was raised on 4th of May, 2021 with the following as House resolutions ( Video attached and document )

“We Sympathize with traders affected by the inferno at Araromi spare parts market, Agodi – Gate, Ibadan, and the Government of Oyo State”

It urged the Federal Ministry of Interior to liaise with Oyo State Government to investigate the cause of the inferno at the Araromi Spare Parts Market, Ibadan, Oyo State, to ascertain the losses of the affected traders, rehabilitate them and prevent reoccurrence;

It also urged the National Emergency Management Agency to immediately provide palliatives to the affected traders and persons to enable them to renovate their shops and restart their business, and

Moreso, CNG also aware of series of follow up letters written by the 14 lawmakers to the

Chaiman House Committee on NEMA and NEMA itself on the urgent need to help the victims of the inferno, which to all these humble efforts of the lawmakers confirmed to have led to the release of the materials to the victim.

The CNG as a non-political group is not writing to discredit any politician or an individual efforts, but to always serve as a watchdog on politicians and government activities, the justification of fairness and betterment of our community is one of our watchwords.

Hence, with all these, if there is need, we will want Senator Kola Balogun in fairness to come up with facts, to show that, it was is own effort that facilitated the relief materials for the victims of Araromi Agodi Automobile Spare Parts Dealers Market, Ibadan and not the motion jointly raised by the 14 Oyo lawmakers and their follow up.