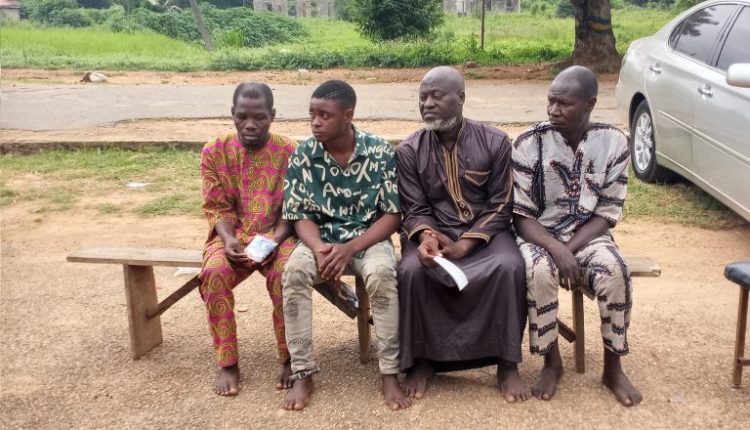 Briefing journalists on behalf of the state Police Commissioner at the Command’s Headquarters at Eleyele Ibadan, the Police Public Relations Officers in the state, Mr Adewale Osifeso stressed that some of the suspects were apprehended in Ibadan metropolis through intelligence gathering.

One of the suspects, Mutiu Idowu was arrested and confessed to having killed one Rufus Olayiwola in order not to pay the money he loaned from the deceased.

“I was provoked when he (Deceased) refused to collect part of the loan from me, days before the incident, I approached him to give me a loan and he gave me, but a few days after, I approached him to give him part of the money I collected from him without interest so I can collect the car that I used as collateral for the loan but the man refused and that got me annoyed and I only pushed him, and before I could say anything he hit his head with wall and that led to his death.”

“I only use the Pepper Spray (teargas spray) on him, before pushing him, I don’t kill him with any object, I was annoyed with his action for rejecting part of the money and I only pushed him, and I hurriedly left with my car when I discovered that he has gone to the world beyond, I actually regret my actions, and I plead for mercy from the authority.”

According to the PPRO, Olakigbe Jonathan was paraded for human trafficking, while Adams Mudasiru, Moses Adeyemo, Salami Isiaka and Wasiu Adeleke were paraded for cases of conspiracy and stealing.

Parading the suspects, the Police Public Relations Officer, Mr Osifeso said the command remains alive to its statutory constitutional mandate of protecting the lives and property of the public in conformity with virtues of commitment, dedication, handwork and courage against the backdrop of the evolution of crime trends induced by criminal elements in the society.

” The Command, through purposeful intelligence gathering from its communal partners,  systematic intelligence sharing and technological surveillance drives, shall always be at the Frontline to take the fire against criminality and other adjoining vices to the doorsteps of those threatening the relative tranquillity enjoyed by the good citizens of the citizens”

“While appreciating the confidence and cooperation received from residents, it pertinent to appeal to all and sundry to take judicious advantage of the Command investigative interventions to always provide the police with credible information on how to Police the society maximally”

“In the same vein, the process of stop and search is an integral proactive stance in the command’s security architecture and as well a core factor in its visibility policing approach”

Folarin Is Capable Of Causing Political Crisis – Oyo PDP, Urges IGP To Call Him To Order

Makinde, Oyinlola, Others beg Gbenga Daniel To Return To PDP