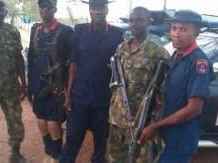 The Nigeria Security and Civil Defence Corps (NSCDC) has deployed 3,500 officers for the governorship and state house of assembly elections in Oyo State.

The officers have been moved to the 33 Local Government Areas of the state and are expected to complement efforts of the other security agencies in the state in elections scheduled for Saturday, March 9, 2019.

Olusegun Oluwole, the NSCDC spokesman, made the disclosure on Friday while speaking with reporters on the preparedness of security agencies for the elections.

Oluwole explained that the officers were deployed to maintain security in all the nooks and crannies of the state, and to ensure hitch-free elections.

According to him, the flash points in Oyo State have been identified and would be tackled by all the security agencies.

He said: “The NSCDC Oyo State Command has deployed about 3,500 officers to monitor the elections in the 33 LGAs and 35 LCDAs. Those who are going to far places have gone. We have taken the issue of vote buying serious and we are doing it along with other security agencies.

“Most of the senior management from the headquarters are also here in our zone. With that, we are going to have credible and fair elections. We are going to have tight security tomorrow [Saturday]. So, there will be no problem and we have told our officers to be apolitical.

“We have all been trained and all of us would be going out to ensure the election is violence-free. And that is why we are giving out our numbers to report in case of any complaint