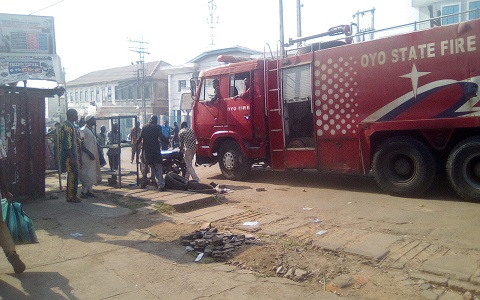 Oyo Firefighters Fights Fire From Being Gutted At Ogunpa Market

Oyo state Fire Service on Thursday displayed job professionalism at Ogunpa Market as their prompt action and technicality displayed save property worth millions of Naira from been destroyed by fire at Ogunpa Ibadan popular market.

This fire, which was believed to be a consequence of power surge in an electrical appliances store, set the shop ablaze.

A witness, Mrs. Bukola Adesanya, who said the fire started around half past nine in the morning, noted that but for quick response of firefighters, the fire would have extended to other buildings.

Mr. Gbadebo, while noting that the fire had been successfully put out, urged the public to always switch off their electrical appliances when they were away.

Some other respondents applauded the fire service for quick response and implored them to sustain the tempo in the year 2020.