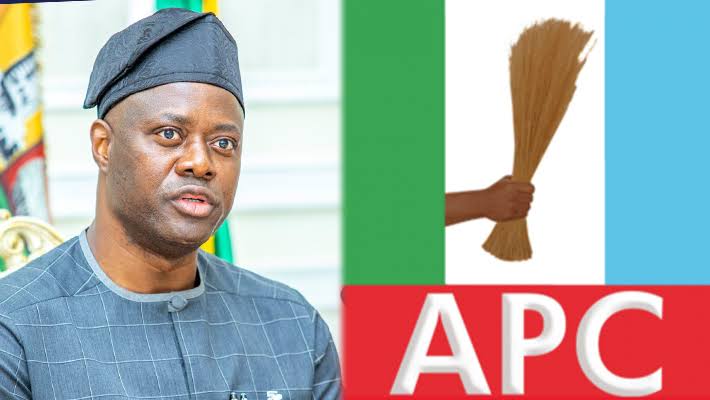 Oyo State Chapter of the All Progressives Congress (APC) has fingered the state governor Seyi Makinde of been behind the continuous attack of it’s members and destruction of campaign billboards.

This allegation came against the backdrop of fresh cases of destruction of campaign billboards and posters belonging to candidates of the APC and other opposition parties. Most of the attacks on such facilities appear coordinated with APC being the worst victims.

In a statement issued on Sunday and made available to journalists in Ibadan by its Publicity Secretary, Olawale Sadare, Oyo APC lamented the seeming lackadaisical attitude of the police and other security agencies towards arresting the ugly trend of coordinated attacks against opposition figures and their properties as perpetrated by some known agents of Makinde and Oyo PDP.

“It is with a deep sense of regret that we are raising the issue of politically motivated again at this time when parties and their candidates intensify efforts to kick-start campaigns ahead of the next general election.

“Those behind the dastardly acts in parts of the state are well known and we have called the attention of security agencies to their nefarious activities on several occasions with proof.

“Just last Saturday at about 5 pm, a team of experts employed by our party were at Toll Gate area on the Lagos-Ibadan expressway where they mounted a campaign billboard bearing the pictures of Sen. Bola Ahmed Tinubu and Sen. Teslim Folarin who are the presidential and gubernatorial candidates of the APC respectively but shortly after (at about 9 pm), a commercial bus brought some red beret-wearing miscreants and they destroyed the billboard. They operated for about 30 minutes without being challenged.

“Before now, the Oyo Central Senatorial candidate of our party, Dr. Yunus Akintunde, has had virtually all his campaign billboards destroyed in various locations across Ol,uyole, Ona-Ara, Egbeda and Akinyele local government areas while those of Barr. Sarafadeen Alli, Honorables Olaide Akinremi, Saheed Akinade-Fijabi, Dapo Lam-, Adesina, Aderemi Oseni, and many others have not been spared in all parts of Ibadanland.

“Another sad development has to do with the increased cases of violent attacks against members of our party at Aliwo, Oke-Adu, Agodi spare parts market, Iwo Road and Iyana Oja Bodija as the violence merchants latched on the hasty address given by the state commissioner of police in the wake of the attacks carried out against participants at October 4, 2022, Solidarity Walk for Tinubu/Shettima in Ibadan.

“The spate and manner of olent attacks indicate that those behind them enjoy the backing of Gov. Makinde and Oyo PDP. There are enough facts on ground to hold members of the controversial Mukaila Lamidi-led Park Management System responsible.

“There are also indications that sponsors and participants in the dastardly acts are not ready to give peace a chance since their goal is to railroad Gov. Makinde into the office for an underserved second term,” APC said.