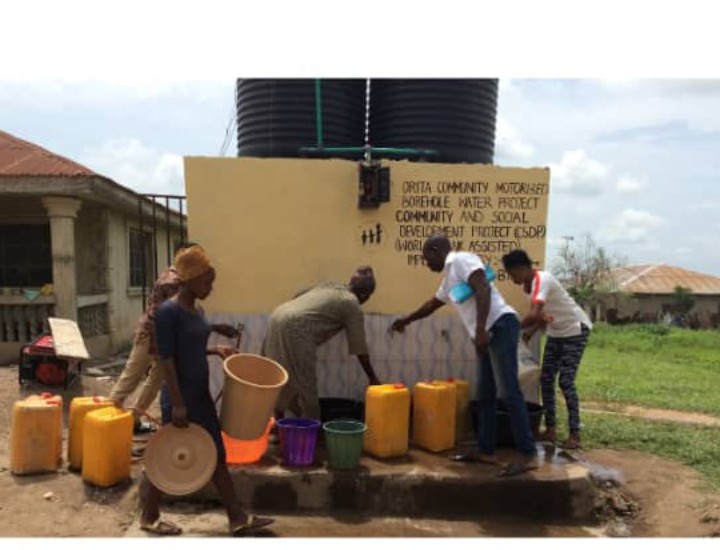 A dream of living a modern day life of electricity supply, availability of drinkable water, an improved education facilities by the people of Orita community in Eruwa, Ibarapa East local government area of Oyo state came true finally, as the people of the community also received their own dividend of democracy through the world bank and the Oyo state government agency, “Oyo State Community and Social Development Agency ” (CSDA) provided transformer for the community after 30-year of darkness.

Westerndailynews gathered through the Hon. Olusiji Oyinlola, the Chairman of the Community Project Management Committee (CPMC) that, the aforementioned projects done cost the government and the World Bank over 8 million Naira including 10 percent of the total cost contributed by the community.

He appreciated the support of the world bank and the state government for ensuring that they are taking development to the rural areas in the country.

Oyinlola who share the experience of the residents before the intervention of the CSDA in the community said “water was a serious problem for our people before now. Our people travel for more than two kilometers before they could get drinking water, but now that we have our community water, we can fetch water at will.

“On the issue of power, it was another problem before now. Many of the residents, especially the artisans usually move out of the community because of the poor power supply but now, many of them are returning to the area because our light is the best in entire Eruwa land. Also, our physically challenged children are now enjoying VIP toilets in their school. We thank the state government and the world bank for their support.

“The projects also create employment opportunities for our people because we have somebody managing the water. The community also employed another person monitoring the transformer and the toilet. They have been managing it effectively,”he said.

In his own contributions, the chairman landlord association in the community, senior Apostle Adewole Emmanuel said the issue of power supply in the area was a serious problem before the intervention, adding that solving water challenges which seems impossible before is now possible.

“We started planning of getting good water and transformer in our community since 1994. We talked to many politicians and associations without a positive solution. In fact, many people have sick while many have died because of poor water consumption but when we heard about CSDA, we applied and its management invited us to a meeting where we sealed the deal. Today, our people are now enjoying good water and a constant power supply. Many people are now coming back to our community. Thanks to the management of world bank and CSDA for their support.”

The secretary of the committee, Abiodun Olaosegbe said life was miserable for the residents of the community before the intervention, “but today the story has change because our people need not to travel far before they could get drinkable water,” he said.

A resident, Mrs Oladiran Funmilayo said before now, women endangered their lives by traveling far to scout for water, even in a thick forest where it is dangerous to walk at night because it is a must for them to get water to prepare food. “First of all, let me thank the Oyo state government and world bank for their support towards this community. Before now, we traveled for over 2 kilometers to get water but today, as you can see, I am fetching water in front of my house. At my comfort zone. Also, the light was not good for many years but today, the light is very full and constant.”

The acting principal of the school for the deaf and blind Eruwa, where the toilet was built, Mrs Adebisi Deborah Folasade said before the intervention, there was no chairs for the pupils to study while the pupils only defecate in the bush. “We thank the world bank and the Oyo state government for these great projects,” she said.

Don’t Allow Them To Upturn The Party Mandate Given To…

Let’s Use Ramadan Lessons To Support Needy People In…