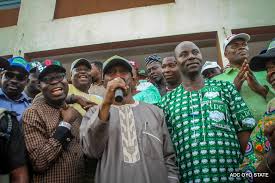 The Campaign Organisation of the gubernatorial candidate of the African Democratic Congress (ADC) in Oyo State , Senator Olufemi Lanlehin has denied the online report that the party Caucus in Oyo State has endorsed President Muhammodu Buhari re-election bid.

There was a report that Caucus of the Oyo State chapter of African Democratic Congress, ADC, said it is working for Buhari because of his numerous achievements in office.

According to the statement, “Our attention have been drawn to a purported endorsement of Buhari by unscrupulous elements feigned ADC Caucus, we want to state categorically that these people are not known to our party.

“We want to say that this was far from the truth, we want reiterate that our presidential candidate still remain Dr Obadiah Mailafia, a former Deputy Governor, Central Bank.

“We want to say that this erroneous claim was part of lies, deceit and propaganda by the All Progressives Congress (APC) and some of political jobbers to score cheap political points.

“It is clear from all indications that APC has lost credibility and has failed in all ramifications, hence, looking for all possible plot to curry undue favour from the public.

“We are urging the people of the state to come out enmass this Saturday to cast their votes Dr Obadiah Mailafia for President, Senator Monsurat Sunmonu for Oyo Central, Senator Olusoji Akanbi for Oyo South and Barrister Bayo Lawal for Oyo North, and all House of Representatives candidates, and come March 9 for our party gubernatorial candidate, Senator Olufemi Lanlehin and all State Assembly candidates”.