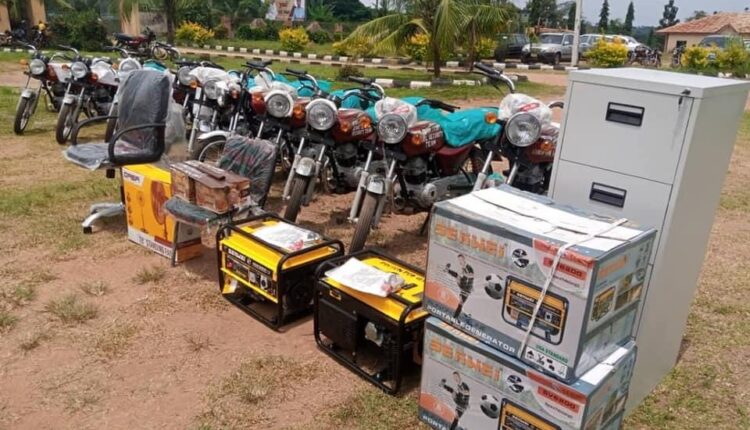 In a bid to improve security of lives and property, the Chairman, Ona Ara local government, Hon. Sanusi Musibau has distributed useful equipments to security agencies and local vigilante groups in the council to enhance their service delivery.

Hon. Musibau explained that the programme was the second faze to strengthen the security operations in the area, to ensure that people sleep with their two eyes closed at night. 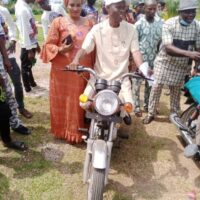 The council Boss, popularly known as Shaba, urged the beneficiaries to ensure positive effects of the gestures on security of the area, with an assurance of more developmental programmes that will improve prosperity of the area.

The Chief Security Officer of the council noted that the local government was the only area, where no violence was recorded during the last #Endsars protest, adding that the security measures put in place by his administration was instrumental to this success.

He however implored the groups to adequately use the equipments in their care to tackle security issues reported in Ifewunmi/Gbaremu and some other parts of the council.

In his goodwill message, the Chairman, Ilaji Hotels and Resorts, Engr. Dotun Sanusi, who commended the council Boss for the gesture, maintained that the equipment will enable the local vigilante groups to give necessary back up to the security agents to serve the people better.

Engr. Sanusi emphasized on the need for collaborative effort to prevent kidnapping and other forms of evil activities in and around the area.

He admonished the indigenes to be good ambassadors of the council, with an appeal to join hands with Hon. Shaba led administration for more impactful programmes.

CSP Paul called on the people to provide vital information that will assist security agents in the discharge of their duties. 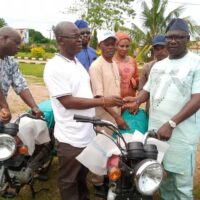 In his submission, Oniladuntan of Laduntan, Chief Kamorudeen Adebowale, advised land grabbers in the area to vacate the environment, with a strong warning that any monarch found guilty of supporting such illicit act will be deposed by the traditional rulers council.

In an interview, the Chairman, Odua People’s Congress in the local government, Com. Gafar Akamo appealed for more support from political class, to ensure the success of all security programmes of the current administration.

Highlight of the programme was presentation of motorcycles, generating sets, office cabinet, and other equipments to the Police, Immigration, Department of Security Service, Oodua People’s Congress, Agbekoya, Soludero, and other local security groups

Drug Abuse Is Most Prevalent In Oyo, Lagos – NDLEA Boss