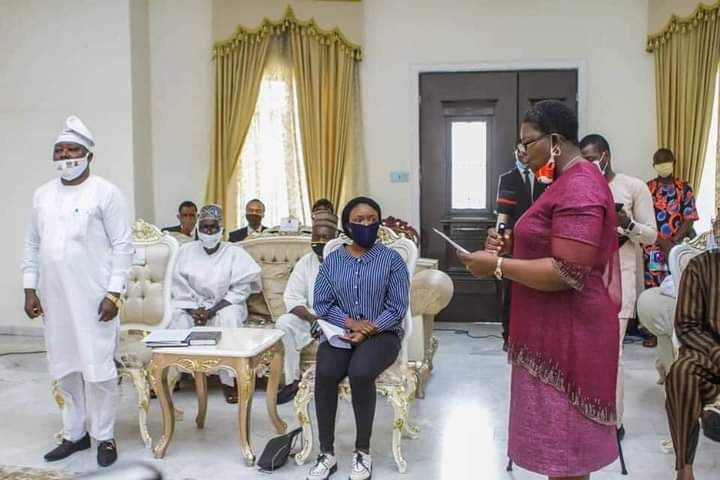 …says govt will be fair to all

Oyo State Governor, Engineer Seyi Makinde, on Thursday, performed the swearing-in of a new Commissioner for Environment and Natural Resources, Barrister Lateef Idowu Oyeleke, declaring that his administration would be fair to all geopolitical zones.

Oyeleke was confirmed by the State House of Assembly as replacement for Hon. Kehinde Ayoola, who died in May, 2020, after a brief illness.

Governor Makinde, while speaking at the Government House, Agodi, Ibadan, venue of the swearing-in, said that Oyeleke was chosen on merit, adding that the criticisms by some elements from the commissioner’s geopolitical zone were off the mark.

A statement by the Chief Press Secretary to Governor Makinde, Mr. Taiwo Adisa, quoted the governor as charging the new commissioner to be ready to render accounts.

According to him, the new commissioner, like other members of the Oyo State Executive Council, will be called to account because the administration is run on the policy of openness and accountability.

The statement also quoted him as saying that his administration is dedicated to the service of the people, adding that whatever is due to anyone would be given to such a person irrespective of political or religious affiliations.

He said: “We want you to see your assignment as covering the entire state. It is not an assignment that should benefit only the geopolitical zone where you come from.

“This is an Oyo State assignment, which is a difficult one because we are launching a new waste management architecture. There has been a lot of sleepless nights. We have been together over the years and we know your capacity.”

The governor charged Oyeleke to give a good account of himself in the new assignment, saying: “We will hold you accountable just like we hold ourselves accountable here.

“In the past, people were able to get away. In the new Oyo State, we want everything to be open. On behalf of other members of the EXCO and the good people of Oyo State, I wish you a successful tenure.”

While speaking shortly after the swearing-in, Oyeleke declared that he will not betray the confidence reposed in him.

He said: “I give thanks to God for this opportunity and privilege and to His Excellency,governor Seyi Makinde, for the trust he reposes in me. I do pledge that I won’t betray the trust.

“Like we all know, the Ministry of Environment is a huge task and most challenging ministry in any state because of the attitude of our people towards waste disposal.

“By the grace of God, I will try as much as possible to, immediately, integrate public enlightenment to let our people appreciate that cleanliness is close to godliness.

“Also, we will put in place a number of measures to change the architecture of the environment of the state, to make our environment cleaner, safer and healthier for the welfare of the citizens of the state.”

The swearing-in was attended by the Deputy Governor, Engr. Rauf Olaniyan; the Chief of Staff to the governor, Chief Bisi Ilaka; the Secretary to the State Government, Mrs. Olubamiwo Adeosun and other cabinet members as well as chieftains of the PDP in the state led by the party chairman, Alhaji Kunmi Mustapha.