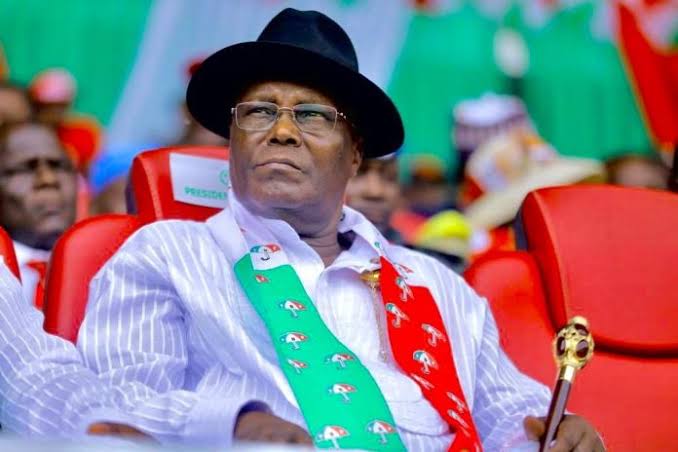 Atiku Abubakar’s father, Garba Abubakar, was jailed for days for refusing to allow Atiku to acquire western education and wants Atiku ro venture into trading until Atiku’s mother (Kande) paid a fine before the father was released. Thereafter, Atiku was enrolled in Jada primary school, Yola. Atiku’s paternal grandfather is called Atiku Abdulqadir, he gave birth to Garba Abubakar who then gave birth to Atiku Abubakar in Jada village in November, 1946.

Atiku Abubakar completed his primary school education in 1960 and was admitted into Adamawa Provincial Secondary School in the same year. He later got his West African School Certificate in 1965 and then proceeded to attend Nigerian Police College, Kaduna. He couldn’t continue in police collage because he was poor in mathematics. Eyah! Eyah!! Eyah!!! That is not the end. He moved to Kano school of Hygiene in 1966 and graduated with a diploma in 1967. You could imagine how a typical struggling Nigerian youth striving ro make ends meet.The young man wandered to Zaria where he got admission into the prestigious Ahmadu Bello University and obtained diploma in law in 1969. After graduation in 1969, Atiku was employed by Nigeria Customs Service where he began to serve Nigeria at that capacity that same year.

Atiku became the second in command (Deputy Director) in Nigerian custom service before he retired in 1989. He bought shares in Intels and went into trading while in service as the civil service rules did not prohibit any employee from buying shares then. He continued with farming,production and distribution of goods and services after leaving the public service . He expanded his businesses and became very successful. married four wives and had 28 children. He joined politics and had his good and bad experiences. He ran for the office of governor in the former Gongola state and lost in 1991. He later battle for the presidential ticket of SDP in 1993 but came third after Babagana Kingibe and MKO Abiola. He was elected by the good people of Adamawa state in 1999 to serve as executive governor but picked by Obasanjo as running mate for the presidential election. They won and he served as vice president of the Federal Republic of Nigeria for 8 years(1999-2007).

Atiku Abubakar was awarded the chieftancy title of Turakin Adamawa in 1982 and later in 2017, he was decorated with the chieftancy title of Wazirin Adamawa and then transferred the previous title to his son, Aliyu. As the vice president of the Federal Republic of, that earned him the title/award Grand Commandant of the Niger (GCON). Only true Nigerians answer GCON. A foreigner can never get GCON attached to his name and if you think I am lying, show me one.

We woke up to hear that Buhari came to court via his lawyers to say that Atiku is not a Nigerian. This is ridiculous, irrational, pedestrian and childish claim. Now hear what Buhari said in court:

Lateef Fagbemi, counsel to APC, argued that “the former vice president was born on November 25, 1946 in Jada, Adamawa state, which was then in Northern Cameroon; hence, he’s a citizen of Cameroon.”

He said “since Atiku is not a Nigerian by birth, he was not qualified to have contested for the election.”

Fagbemi further argued that “section 131(a) of the constitution stated that a person must be a citizen of Nigeria by birth to be qualified to contest as president of the country.”

“The APC accused the PDP of presenting a non-citizen as a candidate for the office of the president. Fagbemi asked the tribunal to declare the 11.1million votes polled by Atiku and the PDP as wasted votes.”

After reading this response, I concluded that the person who came up with this response has a mixture of warms and wool in his brain. How can you prove that number two citizen in Nigeria and one time second in command in Nigerian custom is not a citizen of Nigeria? I know most of us in this country lost our senses of history but we will not forget how northern Cameroon became part of Nigeria. We were not born but we could lay our hands on the history books.

There was referendum in Cameroon under the supervision of United Nations whether northern and southern Cameroon would choose to remain in Cameroon or be integrated into Nigeria.

November 1959 British Northern Cameroons Plebiscite: Voters were asked if they wanted to join Nigeria when it becomes independent or decide the political status at later date. 42,788 said they wanted Union with Nigeria while 70,546 preferred a later date to take decision. And they delayed the decision till 1961.

Main Points: Voters were asked if they wanted to unite with Nigeria or Cameroon when independence is granted to the two regions. The distribution of the scores are shown below:

The outcome of the plebiscite revealed that Southern Cameroon wanted to remain as Cameroon and Northern Camoroon showed through their votes that they wanted to be part of Nigeria. If Jada in Adamawa became part of Nigeria as a result of the plebiscite and the constitution of Federal Republic of Nigeria captured Jada as one of 774 local government who is that unlearned person that came up with the conspiracy of robbing Atiku his citizenship status?