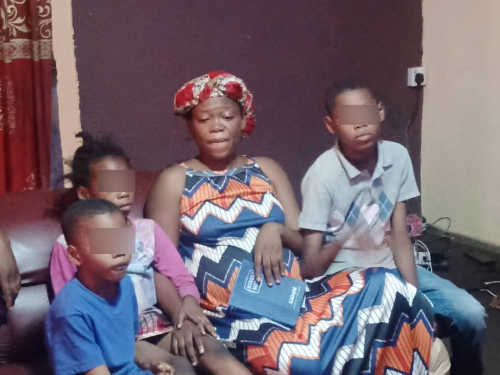 Late Titus Badejo “ Eja Nla “ : What Wife Said About Him

Adebisi Badejo, wife of a journalist who was shot dead in Ibadan on Saturday evening, Titus Badejo on Monday said her husband was killed at his prime when he should be taking care of his family.

SaharaReporters reports that Badejo, a father of four, was killed at a popular hotel and nightclub in Oluyole, Ibadan.

The wife of the deceased made this known when the Nigerian Union of Journalists in Oyo state, led by its chairman, Comrade Ademola Babalola, paid a condolence visit to the family house of the deceased.

The wife of the deceased said, “My husband was not a fighting type. He played with everyone. People have been asking me if I suspect anyone but I tell them nobody. I don’t suspect anyone because you would not see him fighting. I want the government to do the right thing to those who killed my husband.

“Such a person should face proper discipline. Government should get them arrested and prosecute them because he was killed when he started making his fortune. This is the time we should be enjoying his sweat. He must not die in vain. They should for God’s sake get his killers. He sold his car to execute a project in Ogbomoso and he promised to buy another car for me and my children. He promised me many things but they didn’t allow him to fulfil any of the promises.

“Government and individuals should do something for his children to support their education and also complete his site, so as for us to move into the house.

“The project was a concert. He was still struggling to get some sponsors for his concert in Ibadan but they didn’t allow him to do it.”

Speaking at the visit, Babalola who prayed for the family of the deceased, said journalists in the state had given the state government three days to arrest the killer of the journalist.

He said, “We are here to offer our condolences to the family of one of us who was killed on Saturday. We feel your pains and we pray that such a thing won’t happen again. The handsome man was killed at his prime when he was supposed to care for his children.

“We have issued a statement to tell the government of the state and the Commissioner of Police to arrest those who killed him and they must be prosecuted. If nothing is done in the next two weeks, we shall take a step further. We will ensure justice is done.”