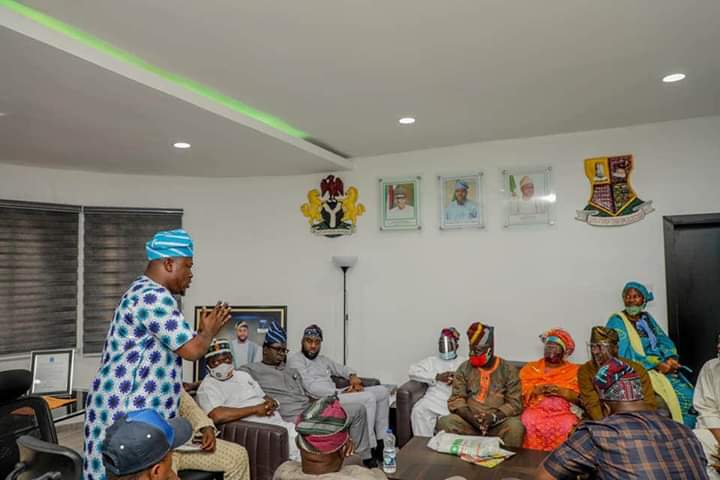 The Chairman, Council of Elders and Board of Trustees, Gbagi Market traders, Ibadan on Monday visited Oyo State House of Assembly Speaker, Hon Adebo Ogundoyin, lodged complaints about the lack of parking space parks and inadequate facilities at the popular Gbagi market.

Speaking inside Ogundoyin office on the essence of their visit to the Speaker, the Secretary, Council of Elders in the market, Evang. Tunde Folorunsho said they came to register their dissatisfaction with the way lock-up shops are being built on areas designated as car park in the market.

According to other Market leaders who spoke during the visit, lack of parking space has continued to discouraged prospective customers with cars from coming to the market to buy their textile materials hence sales are negatively affected.

The elders equally identified their other needs in the market to include lack of portable water, inadequate and irregular power supply, lack of enough toilet facilities, lack of good road network within the market among others.

In his response, Hon. Ogundoyin commanded the market leaders for walking up to government to made their dissatisfaction known, he said
governor Makinde is aware of their needs in the market and that was why he promised during the election campaign in 2019 that he would address infrastructural problems in the market.

” I want to assure you that your requests will be comprehensively presented to Governor Seyi Makinde. Though he is aware of your needs in the market and that was why he promised during our election campaign in 2019 that he would address infrastructural problems in the market. We will not only improve facilities at the market, we will also decongest the market and ensure parking spaces are provided at every strategic point and area at the market. I will send a delegation of the Oyo State House of Assembly to the market for on the spot assessment of the situation there. Let me state categorically that all illegal shop construction going on in the market will be stopped forthwith. We are determined to restore the lost glory of Gbagi International Market. Hon Ogundoyin said.

The Oyo State Speaker assured the elders and leaders of the Market that the present administration led by Governor Seyi Makinde will not renege on its promise of providing necessary infrastructure in the market to befit the status of an international market and inline with the original master plan as designed by late Chief Bola Ige.