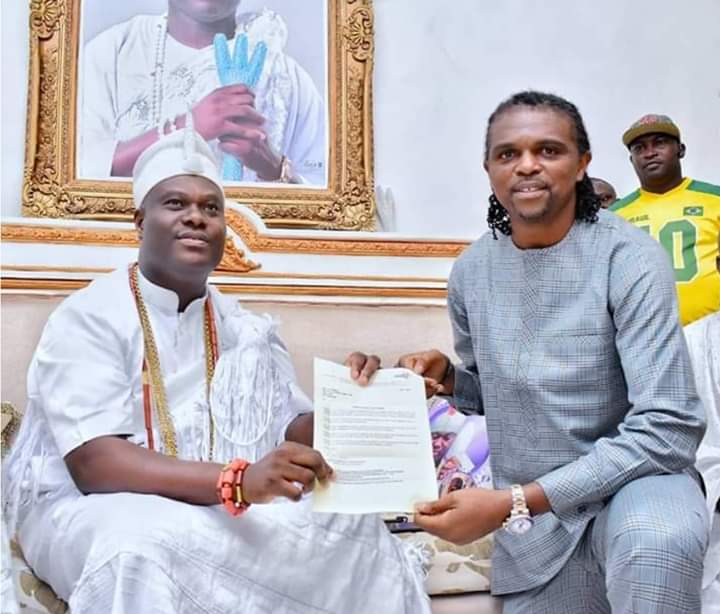 Kanu ‘Has Touched The Heart Of God’ – Ooni Of Ife

Ooni of Ife, Adeyeye Enitan Ogunwusi, said that the life-saving initiative of Nwankwo Kanu through the Kanu Heart Foundation (KHF) “has touched the heart of God”.

The monarch, who made this declaration at a reception for Kanu and his entourage at his palace in Ile-Ife, said the two-time African footballer of the year award winner had extended genuine love to many indigent people who otherwise would have died with their heart ailments.

“God is love and anyone who is able to show love to humanity has touched God,” he remarked.

Accepting his appointment as patron of the Kanu Heart Foundation, Oba Ogunwusi said he had followed the pre- and post-retirement lifestyle of the former Arsenal playmaker, saying he had been impressed with Kanu’s resolve to give back to the society.

“That is the purpose of God bestowing wealth to people in order to help the poor,” he said, as he relived some of the magical goals that made the former Super Eagles captain a brand around the world.

Kanu, who commended the monarch’s gesture, said he was also impressed by the warmth that was accorded his visiting team.

“I will always remain grateful for your humility and open mind, Kabiyesi,” Kanu said.

Coordinator of Kanu Heart Foundation, Onyebuchi Abia, said at the reception that the foundation had carried out 562 open heart surgeries since inception in 2000.

About 12 troupes of traditional dancers welcomed Kanu and his entourage at the palace, after which they were taken on tour of some historical and traditional sites in the ancient city.

He Is A Courageous Man, Very Consistent In Dealings –…

BREAKING: JAMB To Hold UTME From May 6, Registration Begins…