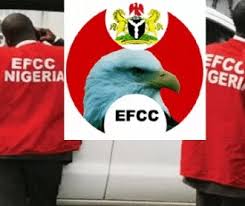 The Ibadan zonal office of the Economic and Financial Crimes Commission, EFCC, has secured the conviction of two internet fraudsters.

The duo of Tosin Awobona and Olamilekan Oluwasiji were respectively convicted on Wednesday, May 15 by Justices Mohammed Abubakar and Ibrahim Watila of the Federal High Court, Abeokuta Judicial Division, Ogun State.

Awobona and Oluwasiji pleaded guilty to the one-count amended charge of possessing documents containing false pretense filed against them which was a product of the plea bargain agreements proposed to the commission by their lawyers.

The amended charge is contrary to Section 6 and 8 (b) of the Advance Fee Fraud and Other Fraud Related Offences Act, 2006 and punishable under Section 1 (3) of the same Act.

Consequent upon their guilty plea, the accused were sentenced to seven months imprisonment each with effect from their dates of arrest.

The two convicts were ordered to restitute to their victims the money they dubiously collected, and also to forfeit all the items recovered from them to the federal government.