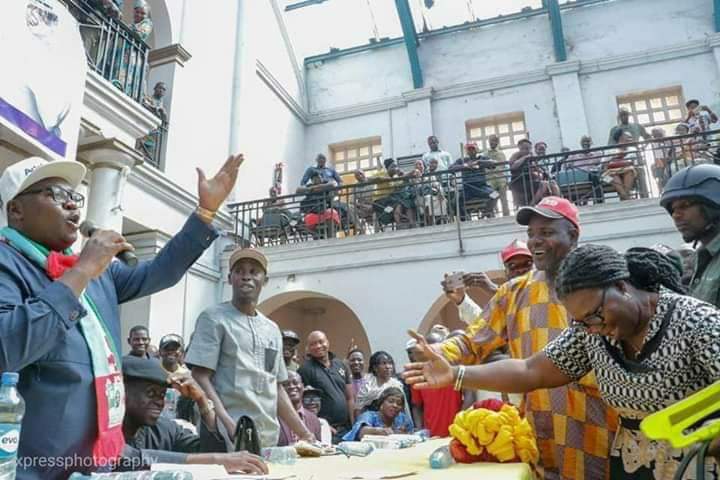 The All Progressives Congress (APC) governorship candidate in Oyo state, Chief Adebayo Adelabu, has promised to implement the N30,000 minimum wage for the state’s civil servants if he becomes the governor.

Adelabu, who made the promise while addressing a mammoth crowd of party faithful and supporters, also promised to prioritize workers welfare without neglecting other citizens, during a campaign rally in Ibadan, on Tuesday.

He assured workers that his administration would pay the N30,000 minimum wage if it was eventually passed into law by the National Assembly and assented to by President Muhammadu Buhari.

Aside from implementing the minimum wage, the governorship candidate also said that his government would ensure prompt payment of workers’ salaries, as well as cater for pensioners and other segments of the state.

Adelabu said: “I want to assure workers in Oyo State that if I am voted as governor, my government will implement the N30,000 minimum wage without qualms if eventually passed by the National Assembly and assented to by Mr President.

“Aside from paying the minimum wage, I will also ensure prompt payment of workers’ salaries because our workers deserve the best so that they too can give their best. But, I will not neglect other stakeholders who are also entitled to the dividend of democracy.

“No doubt, civil servants are crucial to the success of any administration. But other categories of the population such as artisans, traders, farmers, students and professional bodies will also have a feel of my administration’s welfare programmes.”

“Throughout my working life, and particularly at the Central Bank of Nigeria, I never received salaries beyond the 25th of every month. Therefore, my administration will make sure that workers’ salaries are paid promptly.”

While promising all-round development for the youths, the APC governorship candidate also affirmed his readiness to run free, functional and qualitative education in the state.

Apart from providing jobs for the youths through agriculture, he said his administration would mobilise them for vocational and technical education while funds would also be provided for entrepreneurship.

The APC chieftain also promised to work with Osun State Government to ensure that Ladoke the ownership tussle besetting the Ladoke Akintola University (LAUTECH), Ogbomoso, was straightened outside the courtrooms.

He appealed to the people of the state to support him in the race for Agodi Government House to enable him to consolidate on Ajimobi’s achievements, especially the enthronement of peace and security.

He stressed that the National Leader of the APC, Asiwaju Bola Tinubu, laid a solid foundation for the development of Lagos when he ruled for eight years, which he said successive progressive administrations had been building upon.

Adelabu said: “God raised Tinubu for Lagos State in 1999 and he handed over to another progressive and the chain has continued till today. That is why Lagos has developed beyond everybody’s imagination.

“I’m appealing to the people of Oyo State to also vote for me to succeed Governor Ajimobi, who I can safely describe as the game changer in Oyo State. He came to free us from PDP’s bondage. Oyo was on trial and error before his emergence.

“He has touched every sector and brought peace and security to our state. That is why our state is developing. The Arabs have oil money, but they are not as developed as Europe and America because there is no peace in their domain.

“I’m the first son of continuity in Oyo State and I’m seeking your support. I thank my father, my leader and my mentor, Governor Ajimobi for reposing confidence in me. I will not let the people of Oyo State down. All stakeholders will be adequately taken care of.”

I Will Continue To Criticise Buhari, I’m His Boss – Obasanjo

No Way, Commission Will Not Extend Election Date, OYSIEC…