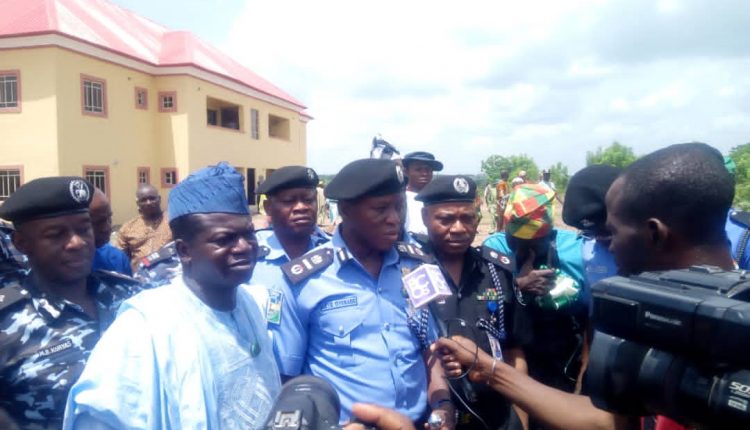 A former House of Representatives member, who represented Ibarapa Central and North Federal Constituency from 2015 to 2019, Hon. Gbenga Ojoawo (Iloko) has also registered his sympathy for the people of Igangan community and families of the victims who was killed during the attack by suspected herdsmen.

Hon. Ojoawo who condemned the night invasion of Igangan community by the herdsmen expressed his sadness over attack that claimed the lives of innocent citizens of Igangan while also leaving many property destroyed couldn’t be more pathetic and unfortunate.

On his explanation on how the Type 11 Police Station, Igangan was initiated and established, the ex lawmaker cautioned and orientated Mr. Olubunmi Sodipo, a Senior Media Aide of current Honourable Member of the Federal House of Representatives, Hon. Muraina Ajibola on the claim that his boss masterminded the establishment of the police station in Igangan.

Hon. Ojoawo said, he was the one who used is honorable office to facilitated the

Abuja Type 11 Police Station to Igangan, which was also commissioned by him on May 14, 2019 before Hon. sworn in as elected federal lawmaker on Jun 11, 2019.

Sometimes, the grief of losing people could be overwhelming that one gets lost in deep thoughts. Worse is if the circumstances that led to the loss are evitable.

It is unfortunate that the current security in the country continues to worsen as days pass by – abductions, maimings, and killings are the order of the day.

The sad occurrence in the early hours of Sunday 6th June 2021, that claimed the lives of innocent citizens of Igangan while also leaving many property destroyed couldn’t be more pathetic and unfortunate.

I believe the state government will not hesitate to bring the perpetrators to book as well as set effective plans in motion to avoid a reoccurrence. The primary responsibility of the government is provision of adequate security for lives and property.

My thoughts and prayers are with the victims of the incident. I do not intend to bring up fresh grief, but the community will not stop missing the victims. May God grant those currently under treatment quick recovery.

In due course, my token gift as a show of kindness will be delivered to the victims.

May we not witness such an unfortunate incident in Ibarapaland and Nigeria as a whole again.

My attention was drawn to the submission made by the Senior Media Aide to our current Honourable Member of the Federal House of Representatives, Hon. Muraina Ajibola, Probably he made the release without full knowledge of his boss

Ordinarily, I wouldn’t have wanted to dignify him with a response. However, considering the fact of setting record straight, it is important that I shed light on the matter, as this will also form a part of our history as a constituency.

To set the records straight, while serving as a representative of the constituency at the Green Chambers in 2018, I raised a motion for the siting of a Divisional Police Station at Igangan. This was based on the border placement of the town as well as the series of insecurity challenges it has been facing.

The consequential follow-up actions, commitments, and monitoring actions translated into the approval of the motion. The result was the Abuja Type 11 Police Station, Igangan, which was commissioned by me on May 14, 2019 before dignitaries in the town and the state at large. (Check the pictorial evidence below)

While government is a continuum, claiming another man’s project is way out of line. I seek to bring to Hon. Muraina’s remembrance that everything we do today goes behind us as legacies. I will also advise him to do the job he has been voted to do rather than laying false claims to a project that had already been implemented.

It’s over two years now and the people of Ibarapa Central/North still await what he has to add to the existing projects. Despite being out of office, I still work round the clock to make sure that other projects facilitated by me but are yet to be implemented due to bureaucratic bottlenecks are brought to fruition in due time.

PDP Governors Forum Meeting In Uyo, What They Discussed

Recruitment: Oyo Govt. To Conduct CBT For Over 7000 Health…