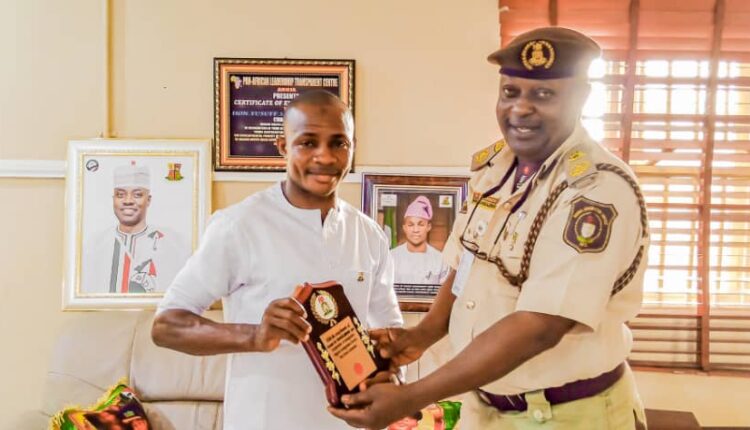 The chairman of Ibadan North Local Government, Hon. Yusuff Sahib Oladayo received a delegation from the Oyo state Immigration Service at the council Secretariat in reconciliation, stronger and cordial ties

The courtesy visit by the Immigration Service was led by Compt. I.A Dansule, and other top officers

“It’s of goodwill that we continue to cohabit as one big family just like we have always been, the oyo state immigration service will never undermine the support shown by the local government in the past years and as such will forever not to be taken for granted”,

The chairman Ibadan North Local Government, hon.Yusuff Sahib Oladayo commended the effort made by Immigration Service reconciliation team, so far, towards ensuring peace and friendly co- existence between the men of the immigration and local government and encouraged them to keep up the good work. He stated that officer’s of the immigration service should have a grassroots and friendly approach not just to political office holders alone but to the ordinary citizen out there as the uniform and whatever they represent was to the interest of Nigerians.

The council boss further reassured that the Ibadan north local government will continue to work with the service to ensure a better service to members of the public.

On the entourage of the new Director General of the oyo state immigration service commission to the office of the chairman were;

S. A Media and Publicity, Office Of The Chairman Ibadan North Local Government

Wole Oyelese Is An Outdated Minister, Following Him Will Lead You To Total Destruction – Olopoeyan Educates Former Minister’s Aides