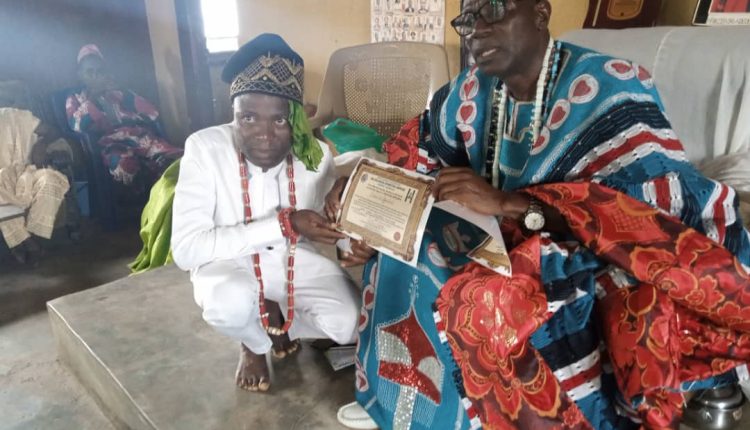 One of the popular radio presenter in Ibadan, Saheed Alatise of Noble FM has been installed as the New Aare Atedese of Asa Kingdom by the Adatan of AsaLand, Oba Dr. Adeolu Akinmoyero, Oosabukola I.

The Adatan of Asa Kingdom, Oba Akinmoyero while conferring the traditional title of a High Chief on Mr. Saheed Alatise, said individuals who have contributed immensely to humanity as custodians of language and culture like Saheed Alatise, popularly known as Oba Irawo should be celebrated by all and sundry, and therefore advocated the effective involvement of the traditional rulers in human and nation-building.

“High chief Saheed Alatise, the brand new Are Atedese of Asa kingdom, as you attain this height in Yoruba language radio presentation and maturity, I want to sincerely commend your unflinching commitment and dedication to the service and loyalty to the staffs and management of Nobel 107.1 FM, Gbopa Ologuneru, Ibadan (The people’s voice), and a virtue that is fast becoming a rare commodity in Yoruba land”

“I want to state clearly that you have recorded significant giant strides, expertise, and objective radio programs presentations and reporting in pure and undiluted Yoruba language to inform the people worldwide.”

“You have educated and literate many people/listeners and that is why this conferment attracts so many accolades, love, dignity, and public interests.”

“I am encouraging you to continue doing all you know how best to do as a true Yoruba brave son.”

The Adatan of Asa Kingdom, Osun State of Nigeria, His Royal Majesty, Oba Dr. Adeolu Akinmoyero, The Oosabukola the 1st, however, maintained that the installation of the Noble FM’s Ace Broadcaster, High Chief Saheed Alatise as the new Aare Atedese of Asa Kingdom will surely encourage others to equally Excel in their chosen fields of environment and careers.

In his remarks shortly after his installation as the Aare Atedese, High Chief Saheed Alatise thanked the royal father for the new title conferred on him and appreciated his fans and the Almighty Allah for their support and grace.

Gov. Makinde Is Yet To Compensate SDP – Amb. Olugbenga…