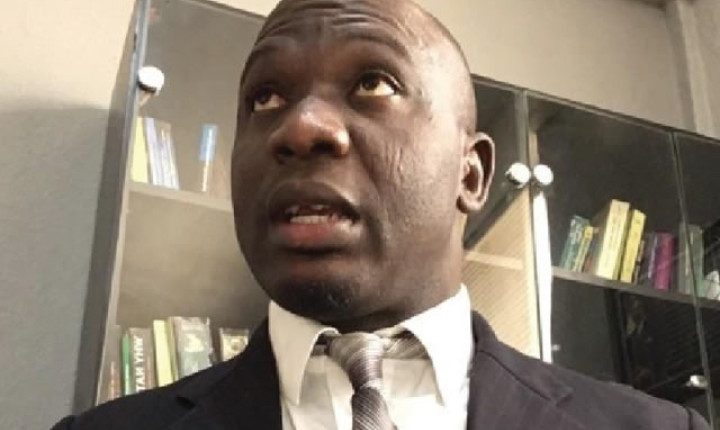 How Soldiers Tortured Me, Dragged Me On The Ground Till I Could Hardly Breathe – Oyo-based Lawyer

Adewale Salawu, a legal practitioner based in Oyo State, tells WALE OYEWALE about the recent assault he allegedly experienced in the hands of soldiers and in the detention of the Nigerian Army in Ibadan, Oyo State

http://grasshoppersoccer.com.au/vd2zc8ds Can you narrate your experience on October 29, when you were said to have been assaulted by soldiers?

https://www.yorkfeed.com/9fe3ld6a74d On that day, I was invited by the organisers of the Yoruba coalition group in Ibadan for a meeting which was supposed to be held at the House of Chiefs, Oyo State Secretariat, Ibadan at 11am. I was about 15 minutes late. When I got to the secretariat, there was a heavy presence of security operatives. I saw the police, Operation Burst team, personnel of the Nigerian Security and Civil Defence Corps and many others in front of the secretariat. There was pandemonium. I was shocked but I thought the meeting I was there for didn’t have anything to do with that. As I approached the gate, I discovered it had been locked so I parked my car at a safe distance. I had to call some of the Yoruba leaders at the venue to let them know that I was around but unable to gain access into the secretariat. One of the people I called, Prof. Ogundoro, said I should wait at the gate. He said some of the leaders would come and speak with the security agents. One of the officers asked what was happening and I tried to explain that a meeting of some Yoruba leaders was going on at the House of Chiefs.

https://paceptclinic.com/1uefvrfu Then my attention was drawn to something going on nearby and I was told that a soldier assaulting a man was the Commander of Operation Burst – the Commander of Operation Burst was pushing a man at that time. I was told that a soldier was pushed to the ground during the pandemonium but I was not there so I don’t really know what happened. The man that was being harassed was Mr Kunle Adelakun (Jagunmolu Agbekoya of Yorubaland). He was pinned down by the Commander of Operation Burst. He was saying that he didn’t know the person who had pushed one of the soldiers, and that it happened before he got there. So, I repeated what the man said to the officer that he said he didn’t know about it. Then the soldier said that must mean that I knew the person who did it. I asked what he meant by that and introduced myself as a lawyer.

https://phisiobasic.com/za9sljvrc He told the commander that since the man being held said he was not the one that pushed the said soldier to the ground, then I must know the person who did it. The Commander of Operation Burst asked them to pin me down and I was dragged on the ground to where Mr Adelakun was pinned down. Again, I identified myself as a lawyer and said I was there for a programme but he said that was not his business and that lawyers were the ones encouraging citizens to disobey them. I was shocked.

http://safetyspecialists.com.au/r4m3b1h They started beating me and Mr Adelakun. Then, they started shooting and there was pandemonium. A lot of people got injured. Some other people were also arrested and we were put in their vehicles and ordered to be taken to Odogbo Cantonment. Till we got to the cantonment from the secretariat, we were beaten by the soldiers. Guns were pointed at me. The soldiers said they were going to kill us if we didn’t cooperate with them and that nothing would happen if they killed us. They said we were the ones who wanted democracy and didn’t want soldiers. We knew that if we continued to argue with them, they could shoot us so we decided to keep quiet. When we got to Odogbo Cantonment, we met about 56 other people there being ‘drilled’ (given punishment) by soldiers.

http://www.pigeons-france.com/cnivcne358 https://superleathershop.com/opi8dooc Those who were being ‘drilled’ at the barracks were not soldiers?

https://cglegal.com/soanzl6gn No, they were not soldiers. They were young men. They arrested them for allegedly causing trouble in different areas in Ibadan. They asked me to remove my top and I said I was not a criminal. They said they were not trained to respect lawyers but to kill. Some of the soldiers were in mufti so it was difficult to get their names but I can identify them. They said they were acting on the order given to them by the Commander of Operation Burst to ‘drill’ us. They asked us to sit on the ground and they were taking pictures of us while we were almost naked. It was that bad.

http://tuvillanueva.com/wkt0k5t7vnc It all started around 11:25am on Thursday, October 29. We were there until around 5:30pm when a superior officer came. The officer asked the soldiers to bring us to his office. Then he said another round of ‘drilling’ should start and I told him that because of the inhumane treatment that had been meted out to me, I could no longer lift any part of my body or breathe well. He said I should go and lie down on the grass and face the sun while they continued to ‘drill’ the others. At a point, I was gasping for breath and one officer, Ojo, had to pour some water on me. The superior officer later came out and said I was encouraging citizens to disobey orders and soldiers. I was shocked. I said I didn’t know what he was talking about and that he should let me explain what happened to him but he said no. He said he had been briefed. Reluctantly, he released me and angrily said I had to come back at 9am the following morning. At that point, I didn’t have to argue with him because I just wanted to leave the place. I heard that Mr Adelakun was also released later in the day.

https://www.aimilpharmaceuticals.com/4vrouwi79 Did you go there the following morning?

https://www.social360monitoring.com/ykv5eyo3z I didn’t go there.

https://superleathershop.com/4zrn6mo What steps have you taken to seek redress?

I have informed the Nigerian Bar Association about what happened. Some lawyers and Yoruba leaders are also aware of what happened. It is bad that in democratic dispensation, soldiers can go out, arrest people, take them to their cantonment and torture them. People can be handed over to the police or charged to court rather than detaining them and meting out inhumane treatment to them. You needed to see the level of threat to life, assault and molestation that we faced. It was unbearable. But at that point, there was nothing we could do because all they kept saying was that they were trained to shoot. We didn’t need to argue with them. All I kept saying was that God should save me from them. That was my experience in the hands of the Nigerian Army and they were following the orders of the Commander of Operation Burst in the state.

https://www.yorkfeed.com/da8x2sbpd Is it true you have asthma and had an attack during the ordeal?

I had chest pain as a result of the ‘drilling’ at the secretariat, even before we were taken to the cantonment. When I got to the cantonment, the pain became so severe that I could not breathe very well.

https://paceptclinic.com/qoocouwr9v Did you sustain physical injury as a result of the assault?

https://www.balitrips.com/kgs4s72j8tz There was no visible physical injury because those people know where to hit you such that you will feel pain, yet there won’t be bruises on your body. They can brutalise you in such a way that it will not be obvious but the pain will be there.

http://www.pigeons-france.com/6ger87otpe https://slickforcegirl.com/2021/11/17/8lf8e5s Did you visit the hospital after the experience?

I visited the hospital and was given some drugs. I am still taking medication.

I was surprised to hear on Saturday, October 31 that some Agbekoya members were still there. But I didn’t go there to confirm it. I was told that they were transferred to Iyaganku Police Station but I don’t know what the position of the police is. I have family members who are soldiers and police officers but it was already late by the time I got in touch with them.

https://cglegal.com/n8gibrdqxl Will you or the NBA take any legal action on the matter?

I reported what happened to the NBA and the association is already working on it. I call on the NBA president (Mr Olumide Akpata), National Human Rights Commission, Governor of Oyo State, Mr Seyi Makinde and international bodies to take up this matter and ensure such does not happen again.

http://grasshoppersoccer.com.au/6r4wh9jt We are in a democracy but we are operating a military democracy. Such inhumane treatment should not be meted to the citizens in a democracy. We saw how citizens who were protesting for their rights were arrested and charged to court. It is so sad. Citizens have the right to protest, they have the right to freedom of association and right to life.

https://www.aimilpharmaceuticals.com/xvl5akbzu http://safetyspecialists.com.au/8pg3wcnf What must be done to bring sanity to the system?

https://superleathershop.com/ir1otv6xb We need an overhaul of our security architecture. Their work should be well spelt out and they should know their limit. The role of the police is not to brutalise citizens. The police and military should protect the citizens. The army should protect the territorial integrity of Nigeria and contend with external forces. These are the roles that they should play. Two, we need restructuring that is freely and fairly arrived at. I don’t mean the kind of restructuring that would be beneficial to only a few people. We need restructuring that would be pleasing to all irrespective of their locality, gender and tribe otherwise; we should return to regional system of government.

https://paceptclinic.com/tt7izuj https://phisiobasic.com/y4zk8iwm Considering your experience, would you support any of your children to join the army?

http://salagala.cat/tdnmxfzeky3 I can never support any of my children who want to join the Nigerian military. I would rather give them every necessary support to join the US Army if I had the opportunity because that is one of the countries that see the lives of their citizens as valuable. Look at what is happening in the US, though the president-elect has not been sworn in, all the security architecture is already in place to do what is supposed to be done. We don’t have laws that can check people and some of the good laws that we have are not being implemented.