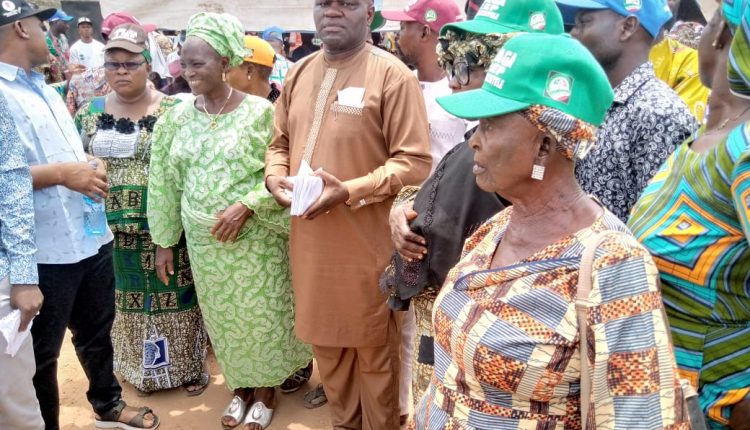 One of the leading political aspirants to the Federal House of Representatives from Lagelu/Akinyele federal constituency, Alhaji Adetokunbo Adeaga today empowered no fewer than twenty women in Akinyele local government with the sum of ten thousand naira each.

The gesture according to the People’s Democratic Party (PDP) stalwart is to help the women boost their business and household finances to cushion the effect of economic crunch occasioned by fuel scarcity currently being witnessed across the country.

Adeaga noted that the twenty four women empowered with ten thousand naira each were drawn on the basis of two persons per ward across the twelve wards in Akinyele local government.

The Lagelu born politician while addressing the general meeting during the Thursday March 31 Akinyele local government PDP meeting held at its Moniya Secretariat, solicited the support of leaders, elders, and all PDP stakeholders in Akinyele towards the realization of his political ambition.

Speaking with journalists shortly after presenting the cash gifts to the women, Adeaga disclosed that his aspiration to run for the green chamber of the National Assembly was born out of his passion to uplift his people out of poverty and to further develop the federal constituency in term of physical infrastructures.

He also promised to continue to ensure there is even distribution of resources and development across the two local governments comprising the federal constituency if given the chance to fly the party’s ticket at the forthcoming 2023 general election.

“I want to use this medium to commend our father and overall leader in Oyo state and South West PDP, His Excellency, Governor Seyi Makinde, for all he has done and still doing, it is because of his achievements that people like us feel very proud to seek the opportunity to run for an elective office on the platform of our great party, the PDP.

“What I’m giving out to the beneficiaries of this financial empowerment is only a token and this is because I feel the need to create a kind of support mechanism that will help our mothers augment their business and household finances especially in this period of economic crunch.

“I also want to stress that this gesture is not politically motivated because of the office I aspire for as it is what I have been doing and will continue to do for my people but as I present myself to you today to seek your support towards the actualization of my aspiration which I believe will enable me to do more on a larger scale, therefore, kindly give me your support and I promise not to disappoint you.” Adeaga stated.

Commending Governor Seyi Makinde’s leadership and the leadership of the party, Adeaga explained that PDP has become a beautiful bride not only in Oyo state but the entire country considering how the ruling party has faired so far.

In his remarks, Chief Akin Aderibigbe who spoke on behalf of leaders and elders of the party in Akinyele commended Adeaga for the kind gesture which he said would go a long way in ameliorating the current economic hardship being faced by many families.

Chief Aderibigbe also expressed the appreciation of the party leaders to the aspirant and prayed for the actualization of his political ambition assuring that the party will be fair to all.

In their separate remarks, Mrs Oyepeju Rashid (ward 9), Mrs. Risikatu Onaolapo (ward 1), and Mrs. Janet Dada (ward 6) who are among the beneficiaries who spoke on behalf of other beneficiaries at the Adeaga financial empowerment during the meeting expressed their appreciation to the aspirant and assured him of their support towards the realization of his political aspiration.

Omo Iya Eleja To Declare For Ibadan N’East, S’East House Of Representatives Seat On Saturday, Makes It In Phases

Just In : Buhari Approves Federal Polytechnic For Oyo With…