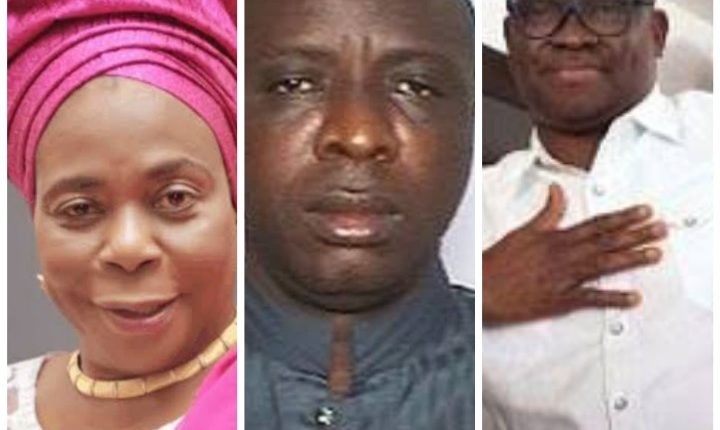 http://salagala.cat/1tkm2zuxz The former governor of Ekiti state, Ayodele Fayose, and former minority leader, Senator Biodun Olujimi on Saturday conducted parallel state congresses for People’s Democratic Party in Ekiti without the presence of Senator Hosea Agboola and members of caretaker panel set up to pilot the affairs of the state amidst division in the party.

http://tuvillanueva.com/oa8n2pyvy While the Caretaker Panel chairman, Senator Hosea Agboola already distanced himself from the congress held on Wednesday, and the state congresses slated for Saturday ( yesterday ), the two warring groups went ahead and produced state chairmen in two separate party congresses.

It was gathered that, senator Agboola, chairman caretaker committee who was charged with the responsibility of restoring peace to the Ekiti PDP before installing new state executives was not anywhere close to Ekiti on Saturday to witness any of the congresses, as it was disclosed that he has vowed never to be part of a congress in the state, rather want party positions to be shared among the contending forces in the state chapter.

Senator Biodun Olujimi-led faction which enjoys the support of elders caucus of the party held their congress at Lotus Hotel in Ado Ekiti, elected a former member of the House of Representatives, Honourable Kehinde Odebunmi as the state chairman of the opposition party in the state.

https://www.aimilpharmaceuticals.com/vambwul Fayose’s group in the presence of former governor, Segun Oni conducted its congress at the Petim guest house in the state capital with honourable Bisi Kolawole emerged chairman from the former governor’s camp

Fatai Buhari 6 Others Listed By Senate To Probe Alleged…

Let Come Back In The Name Of God – Odidi Omo Begs…