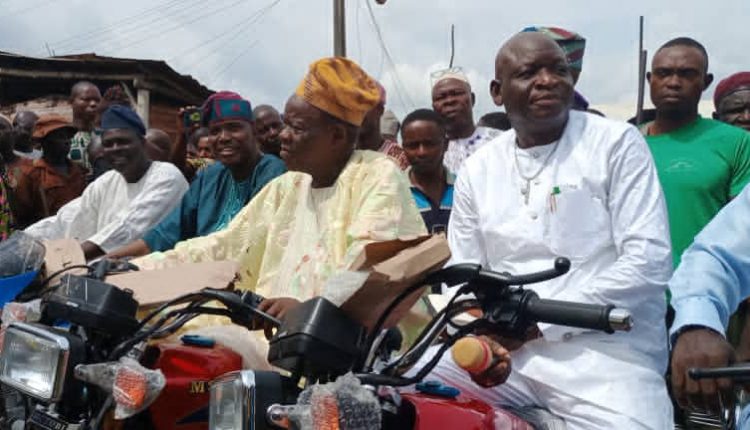 The Honourable Member representing Ibarapa Central/ Ibarapa North Federal Constituency in the 9th House of Representatives, Hon Dr Ajibola Muraina on Saturday July 3, 2021 took further steps in the strengthening of the local community-based security arrangements in the towns of Igangan, Tapa, Ayete, Idere and Igbo Ora as he donated ten, 10 brand new Motori motor cycles as well as one million, two hundred and fifty thousand naira, N1,250,000 to the local hunters and vigilante security outfits taking responsibility for the security of the five Ibarapa towns in his constituency. He also donated the sum of three million naira, N3,000,000 towards the rebuilding of the Asigangan palace that was put to fire in the barbaric Fulani herdsmen invasion of the early hours of June 6, 2021.

The presentation ceremony which held beside the ruins of the razed palace had in attendance HRM Oba Lasisi Olawuyi Adeoye, Gbadewolu I Aribiyan II Asigangan of Igangan and the Asigangan-in- Council.

The men and women, boys and girls of Igangan flocked in their numbers to the event which was graced by representatives of the Igangan Community Development Association and Igangan Development Advocates.

Also in attendance were representatives of the local security outfits/ vigilantes of Igbo-Ora, Idere, Ayete, Tapa and  Igangan.

In his keynote address, Chief Samuel Olawuwo thanked the local hunters and vigilantes from the five Ibarapa communities  for the work they are doing. Hon Sarafadeen Olaoniye on his own part acknowledged the role played by the local community-based security outfits in conjunction with the soldiers (earlier facilitated to be in the area by Hon Ajibola Muraina) in repelling and curtailing the infuriating herdsmen invasion. He appealed to the people of Igangan to continue to be law-abiding and continue with their lives and business without fear.

Hon Olusegun Okedeji, in his office as the Chairman, Igangan Community Development Association noted that although many eminent people were written to for support in the aftermath of the invasion, Hon Ajibola Muraina is the first person to respond to Igangan’s cry for help.

Although Mr Ogunbanwo Jamiu Adisa, Vice Chairman, Igangan Development Advocates in his address had many questions for Hon Muraina (which he creditability answered in his response), he thanked Hon Muraina for the legislative interventions that birthed the upgrading of the Abuja Type II Igangan Police Station to Igangan Divisional Police Headquarters, scholarships for constituents, job placements in the federal services, et cetera et cetera, not forgetting to mention the support he as a person is enjoying from Hon Muraina towards the achievement of a personal goal.

Hon Liasu Ololade congratulated Hon Muraina on the House of Representatives approval of the bill on the establishment of Federal Medical Centre, Igbo Ora while thanking the local community-based security outfits for their courage in standing up to night marauders who came attacking with pump action rifles while they only had dane guns in hand.

In his response, the Asigangan of Igangan acknowledged Hon Ajibola Muraina as a true son of Igangan and having prayed for him at length conferred the “Amuludun of Igangan” chieftaincy title on him.

Hon Ajibola Muraina, in his response condoled with the people of Igangan on the tragic invasion and thanked the local hunters and vigilantes who rose to the occasion. He reminded the people that since the first day of plenary in the 9th House of Representatives, he had been calling attention to the spate of insecurity in Ibarapaland and more recently he submitted a petition to the Presidency via the Speaker, House of Representatives while copying the National Intelligence Agency and the Senate President on the need to address the insecurity in his constituency and compensate twenty five, 25 victims since the year 2015.

Also in response to questions earlier asked, Hon Muraina responded that the most massive physical project he facilitated into his constituency, the electric power project is partly sited in Igangan and this is a worthy legacy which completion he is working towards. He concluded by intimating that as member of the Border Communities Members of the House of Representatives, work is ongoing to recognize Igangan and some other Ibarapa communities as such.

Thereafter, the Asigangan of Igangan handed over the keys of ten, 10 motor cycles in turn to the respective heads of the local security outfits of the five communities of Igbo-Ora, Idere, Ayete, Tapa and Igangan that make up Ibarapa Central/ Ibarapa North Federal Constituency via the two hundred and fifty thousand naira cheques (drawn in favour of each of the said respective five communities) were handed to them by Sir Chief Samuel Olawuwo and Hon Sarafadeen Olaoniye. The three million naira (N3,000,000) cheque support for the Asigangan palace project was handed over to the monarch.

In rounding up this demonstration of love and support for his constituents in general and the people of Igangan in particular, Hon Muraina proceeded to a top notch medical centre in the locality, where Mr Olukunle Kehinde and Mr Adefemi Adetunji, residents of Igangan who suffered physical harm during the Igangan invasion were being medically treated.  After condoling with them, a sum of N100,000 cash was equally shared between the two to subsidize the cost of their medical treatment.

S/W ZONAL CONGRESS: Before, During, After, Political,…