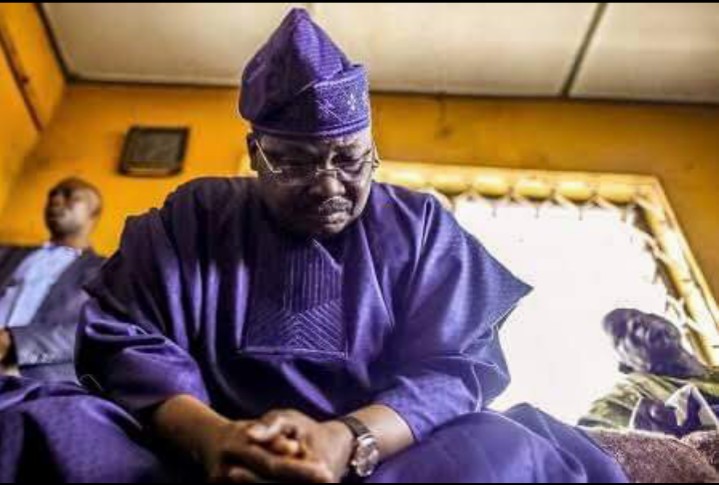 Group Advises Buhari Not To Consider Ajimobi For Federal Appointment

A caucus group within Oyo APC has raised an eyebrows on the recent vote of confidence passed on Ajimobi by the party stakeholders in the state, the group described the Ajimobi party leadership as tested and failed therefore not qualified to paddle the party’s Canoe ahead of 2023.

The group, “APC reformers group”
which comprises of APC former political appointees and leaders in Oyo state frown at the show of shame displayed by APC led by the state governor in the last election, faulted the governor style of leadership which was based on self centeredness.

In a statement signed by the group acting secretary, Sulemon Ramoni, it was stated that, as a result of poor outing in the last elections, the group calls on the President Buhari and APC national leaders not to considered the Oyo state governor, Senator Abiola Ajimobi for any appointment for the interest of the party.

The statement reads: “After spending almost eight years in office, the people of Oyo state have passed a vote of no confidence in Ajimobi by ensuring that he lost his unit, ward, local government and the state in the last election.

“Of what benefit would the decision of his self-appointed leaders and handpicked executive be for the party, democracy and the good people of the state?

“Mr President and the national leadership of the party including Asiwaju Bola Tinubu should not be misled by the charlatans to consider Ajimobi for a ministerial or any federal appointment which is their motive.

“Any federal appointment for him will worsen the situation of the party in the state, make reconciliation impossible and lead to more loses in future elections.

“The party lost the presidential election in Oyo state because it held on the same day with Ajimobi’s senatorial election.

“The State elections were lost because of his influence and interference.

“After the 2015 general election, Ajimobi scolded the party chairman, Chief Akin Oke for losing his unit and ward, as a matter of fact he advised him to resign.

“Some local government caretaker chairmen were also removed by him for losing their constituencies. Now that he has lost woefully, he deserves no reprieve.

“The APC Reformers advised the national leadership of the party to immediately dissolve the APC executive in the state from the wards to the state and constitute a caretaker committee to rebuild the party.

“The president was also advised to opt for young, vibrant and progressive minded people from Oyo state for ministerial and other federal appointments instead of the completely rejected Ajimobi and his ilk.”

LET’S MOVE FORWARD….LET’ MOVE TO THE NEXT…