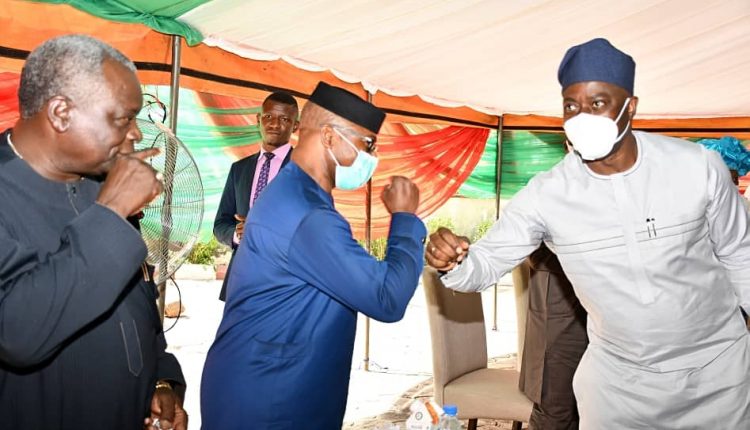 https://www.aimilpharmaceuticals.com/w3b92t67b3 Leaders of the Peoples Democratic Party (PDP) in the South-West geopolitical zone have harped on the need for unity and cohesion in the party, stating that the zone remains strategic to the PDP if it must win election at the national level.

https://www.yorkfeed.com/uelcr55t4jt The leaders, including the Oyo State governor, Engineer Seyi Makinde, former Governors of Osun and Ekiti states, Prince Olagunsoye Oyinlola and Engr. Segun Oni as well as members of the Board of Trustees of the party, and party chairmen from the states, among others, called on the national leadership of the party to bring all aggrieved factions in the party together.

A statement by the Chief Press Secretary to Governor Makinde, Mr. Taiwo Adisa, indicated that the party leaders met at the Government House, Agodi, Ibadan on Thursday and released a communique endorsed by the Acting National Vice Chairman, South-West, Hon. Dayo Ogungbenro.

http://grasshoppersoccer.com.au/nbvunm1z36 In the communique, the South-West PDP leaders appointed a five-man reconciliation committee headed by Prince Oyinlola, which was charged with the responsibility to unite all factions in the geopolitical zone.
Other members of the committee, the statement noted, include: Chief Saka Balogun, Chief (Mrs.) Kofoworola Bucknor-Akerele, Ambassador Omolade Oluwateru and Barr. Olayinka Kukoyi.

http://salagala.cat/j9mcaevjlm The statement further stated that the meeting also resolved that zonal executive positions of the party should be zoned to all states of the South-West, adding that it has become imperative for the party to unite ahead future elections across the zone.

The communique read: “We the leaders of the Peoples Democratic Party (PDP) in the South-West geopolitical zone held a meeting at the Government House, Agodi, Ibadan, today, November 12, 2020.
“The meeting, which was presided over by the Governor of Oyo State, His Excellency, Engr. Seyi Makinde, FNSE, discussed the need for unity and cohesion in the Party in our geopolitical zone and across the country and the need to exercise caution on the proposed move to clampdown on social media by the All Progressives Congress (APC-led) Federal Government.

https://www.social360monitoring.com/xy8b211pqq “After a careful appraisal of the political developments in the South-West, the urgent need to unite the PDP in the geopolitical zone and to ensure that all aggrieved members come together to build a great Party, we do hereby resolve as follow:

https://slickforcegirl.com/2021/11/17/zuwmi8q6 “That a 5-man Committee be set up to reconcile all aggrieved and warring factions in the South-West PDP in order to bring about peace and unity in the Party.

http://tuvillanueva.com/11advrn2xk “The meeting also resolved that, in the spirit of fairness and equity, additional slots of ex-officio members be given to Ekiti and Ondo states in view of the fact that they would occupy only one office each in the zone.”

http://safetyspecialists.com.au/3rfobkjr8m The PDP leaders also used the occasion to call on the Federal Government and the National Assembly not to go-ahead with the proposed clampdown on social media, saying the move will infringe on Nigerians’ freedom of expression.

https://www.passion-outlet.com/ujl2xdbg They called on the Federal Government to strengthen existing laws to prevent the abuse of the freedom of expression.
In his remarks, Governor Makinde maintained that the meeting was convened to address the challenges facing the party in the South-West.

https://phisiobasic.com/ptctpnmj0 He said: “PDP South-West is the only place where if PDP wants to win nationally, it must get right. Once they fail to get the South-West right, they should forget the presidency.

https://cglegal.com/u33lt1z “So, for us, we have to try to pull together and get things right. My observation is, in the past, some arrogated power to determine the fate of PDP in the South-West to a few individuals. And I am saying loud and clear here that being the only PDP governor in the South-West today, I don’t have such power.

“If we pull together collectively, that is when we can achieve success. So, there are two things that stand out in this meeting.

https://cglegal.com/8tbrqn9 “In Ondo State, during the last election, it is not as if the people of the state don’t like our party or candidate, it was the party structure that failed to do the needful all over, which made us to be where we are currently. But I believe in God and I will tell you why. We were in this same position in Bayelsa. The governor-elect was already rehearsing before they brought him a letter that he is going nowhere. If you know how to pray, keep praying because I know there is nothing God cannot do, even in Ondo State for PDP.

https://www.aimilpharmaceuticals.com/8hz5fm4k “One of the major reasons why I said we need to come together is premised on unity in South-West PDP. We still have few elections ahead of us. We have a great task before us. Out of six states, there are three without state honourables at that level.

https://www.passion-outlet.com/x8puvsyc2mh “Though some of the aggrieved members may actually have legitimate reasons, we have to reach out to them. I am hoping that our leaders that are present here will assist us to bring about a unified front for the party in the South-West.

https://www.yorkfeed.com/7bro8p8ub1c “One of the things I feel we will take away from this meeting is also to agree on the zoning for the positions available within the south-west exco. And anything that is zoned to a particular state, the leaders and stakeholders from that state will take it home and make a decision on how to populate that. Once we do that, when we get to zonal congress, we will do what we have to do and go home. This is how things have always been done in the South-West and we will go back to that tradition. The South-West must show leadership for the party nationally and the zone must show leadership for the country.”

Earlier, the acting zonal chairman of the South-West PDP, Hon. Ogungbenro said it was high time the party reclaimed the Presidency, saying it has become important to unite all members of the party.
He said: “I am appealing to our leaders of goodwill. I am happy we have a very full house of BoT members who are the conscience of our party. We have former governors here. We have good stakeholders here. We should, please, bury our hatchets and forge forward for unity, because it is only in unity that we can achieve what we have on ground.

“I, therefore, admonish all leaders of goodwill and all stakeholders to allow peace to reign in our different state chapters, because without peace, we cannot go anywhere.”