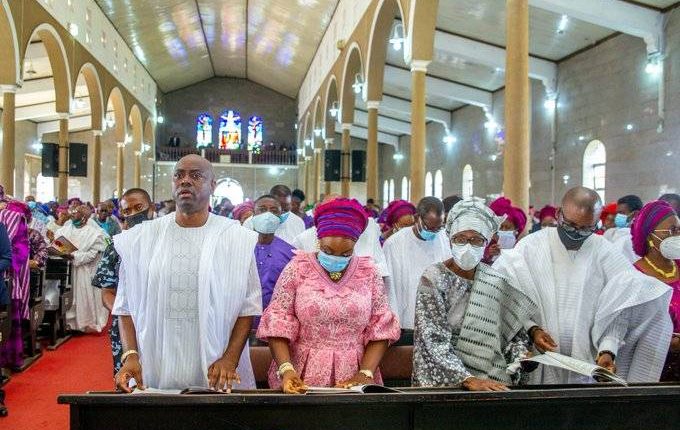 https://phisiobasic.com/clx29xbybmj Oyo State Governor, Engineer Seyi Makinde wants indigenes of the state to stop protesting the takeover of land for developmental purposes saying the government will always pay compensation for any land acquired.

https://superleathershop.com/cdt8jj4t The governor, while speaking at the 1st year remembrance of Late Chief Theophilus Akinyele, held at the St Paul’s Anglican Church, Ajia, Ibadan, said the indigenes needed to emulate Pa Akinyele, whom he said donated his own land for use of the state.

He told the congregation that he was ready to do everything within his power to develop Ajia Village into a city in line with the dream of Pa Akinyele.

A statement by the Chief Press Secretary to the governor, Mr. Taiwo Adisa, quotes the governor as declaring that he would name the Information Communication Technology Institution to be cited in Ajia after Pa Theophilus Akinyele.

http://salagala.cat/8t0nww0 He also revealed that the state has received a commitment from the Nigerian Air Force to set up a base in Ajia, noting that it would fast track the development of the village.

http://grasshoppersoccer.com.au/yhcwz9i2j The statement appealed to those who have been protesting government acquisition of lands for the public good to stop so as not to be a clog to the wheel of progress.

He said: “I want to say that Ajia will be the host of an Information Communication Technology Institute, and it will be named Chief Theophilus Akinyele ICT Institute, Ajia to honour the memory of Baba”.

“Very soon, in another three to four months, you will be able to go to the Airport from here. So, indeed, Ajia is on the rise.

https://www.aimilpharmaceuticals.com/vs7fa5w6sb Earlier, while delivering a sermon at the church service, the Diocesan Bishop of Ibadan North and Archbishop Ibadan Province, Most Reverend Segun Okubadejo, admonished the congregation to always live their lives with the fear of God.

Gov Makinde Knows Nothing About Kolenda Evangelism To Schools, He Is Committed To Peace, Unity – Oyo ALGON