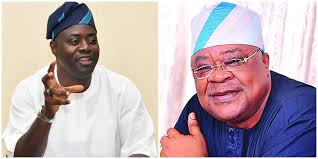 The Ogbomosho born PDP chieftain described the late former governor as a lover of his home town, Ogbomoso, Ibadanland, Oyo state and the entire country as a whole.

Agbebi who stated this in a statement he personally signed on Thursday in Ogbomoso said; “Governor Makinde should be commended for his political maturity for despite they are not belonging to the same political party, the love he had for the former governor reflected in his voice and body language.”

The PDP leader also commended a former senator representing Oyo North Senatorial District, and Deputy Whip of the Senate, Senator Hosea Agboola, popularly called Halleluyah for his supports for the party and the governor in the state.

The party stalwart who further said the death of the former governor Akala is a major setback for the people of Ogbomosoland and the state at large urged elders in Ogbomosoland to speak with one voice and support governor Makinde to succeed in promoting peace in the state.

“Former governor Akala is my father, brother and leader in Ogbomoso land. He was a good man. He loves Ogbomosoland. His death still remains a ride shock to me and the entire people of Ogbomosoland. He loved us and we loved him also.

“Now, he is no more but his legacies lives on. On behalf of the entire people of Ogbomosoland, we are saying a very big thank you to the governor of the state, Engr. Seyi Makinde for his political maturity. The governor, upon hearing the news terminated the state event to honor our son, brother and leader.

“We are also appreciate him for his visit to the palace of our late royal father, Oba Jimoh Oyewunmi who died last year December. We understand he was not around when the aged monarch died and he sent a powerful delegation to condole the people of Ogbomosoland.

“Returning to the country, the governor came around and carried out his duties. He promised to give our father a state burial. W are now using this medium to warn people making unnecessary criticism over the death of Soun of Ogbomoso to desist from such unreasonable assertion to avoid the wrath of God,” he said.

Why I Returned $4,050 To Passenger – Oyo-born Bolt Driver

Just In : APC Begins Sales Of Forms For Congresses July 1