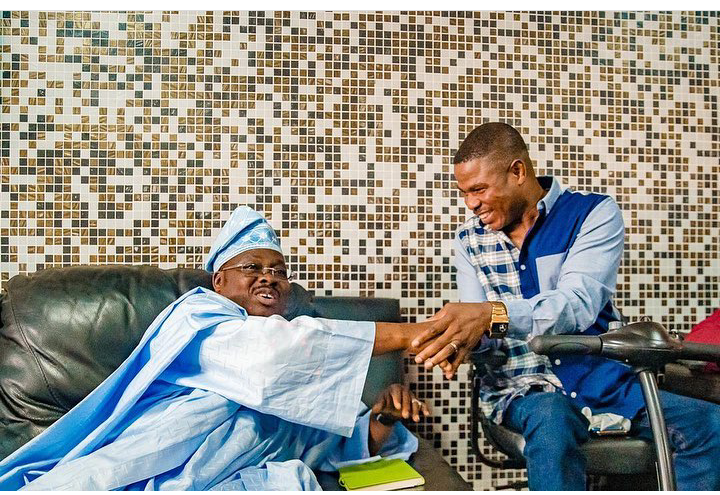 In reaction to unreserved public apology made few days ago by popular gospel single, owner of Fresh FM radio station and his station management to Oyo State government and governor Ajimobi over false broadcast, falsely naming him as a co-owner of the state’s central abattoir, the state governor, Senator Abiola Ajimobi had accepted the apology and admonished the radio station journalists to always adhere to journalism ethics.

Oyo State Governor, Senator Abiola Ajimobi, has accepted the public apology of the management of an Ibadan-based radio station, Fresh FM, over a broadcast falsely naming him as a co-owner of the state’s central abattoir.

A press statement by the governor’s Special Adviser, Communication and Strategy, Mr Bolaji Tunji, on Tuesday, conveyed the governor’s acceptance of the apologies, which is being aired on the station.

In the spirit of the Easter Season and the fast-approaching Ramadan, the governor said he had decided to put the matter behind him, following appeals by the Chairman of the station, Mr Yinka Ayefele and the Presenter of Political Circuit, the programme on which the offensive statement was aired, Mr Isaac Brown.

The station had in a public apology signed by Ayefele and Brown, which is being aired on Fresh FM, apologized to the governor for the ‘unguarded statement’ of its studio and guest analyst, Dare Adekanmbi, that cast aspersion at the person of the governor.

The statement had read, “The chairman and management of FreshFM wish to formally tender its (sic) unreserved apologies to His Excellency, Senator Abiola Ajimobi, Governor of Oyo State and the Oyo State Government for the false statement, alignment, misinterpretation as broadcast in our Saturday political programme, titled Political Circuit.

“In the said broadcast, our studio guest and analyst, with the name Dare Adekanmbi, falsely declared that his investigation revealed that the Governor of Oyo State, His Excellency, Senator Abiola Ajimobi negotiated shares for himself, thereby ascribing co-ownership of the central abattoir to His Excellency, Governor Abiola Ajimobi, whereas, the governor does not own and never owned any equity in the said enterprise.

“Our organization and its board of directors, including Evangelist Yinka Ayefele, hereby tender our unreserved apology to Governor Abiola Ajimobi and the Oyo State Government, having found that this insinuation by our guest analyst is false.

“We hereby withdraw all statements made in the said broadcast and regret all damages this unguarded statement would have caused Governor Ajimobi, whom we hold in high esteem. We hope His Excellency and the people of Oyo State will accept our unreserved apology.”

The governor used the opportunity to admonish journalists to guard against libelous and slanderous publications capable of ridiculing or lowering the esteem of their targets in the estimation of right-thinking members of the public.

Ajimobi, who described Ayefele as his son, said he was forced to seek legal redress to clear his name and reputation following the claims of the studio analyst, Dare Adekanmbi, that he has written proof of his accusation.

The governor said, “To err is human and to forgive is divine. I have forgiven Fresh FM, the station’s chairman and management. I have also forgiven the presenter of the programme, Isaac Brown and Dare Adekanmbi, who pronounced the slander.

“I’m a firm believer of investigative journalism. But, I frown upon the attitude of journalists who conjure innuendoes, libels, slander and outright falsehood and present them to the public as exclusive stories.

“Sometimes, I wonder whether they consider the incalculable damage they do to the person being targeted. It took years to build a name and reputation, but it does not take more than a stroke of a careless pen or unguarded mouth to destroy.

“I would not have taken the matter seriously if not that the said analyst insisted that he had sufficient proof to back up his slander and unguarded utterances against me. I wanted to give him and Fresh FM the opportunity to expose me if they have any iota of fact to substantiate their falsehood.

“This is festive season and I have, in the spirit of Easter and the coming Ramadan, forgiven everyone involved in this matter and hope that lessons have been learnt. I wish the Fresh FM and the management the very best.

“As humans, we are not perfect. Definitely, I must also have offended some people in one way or the other. I use this opportunity to implore them to forgive me as I have forgiven these people too.”