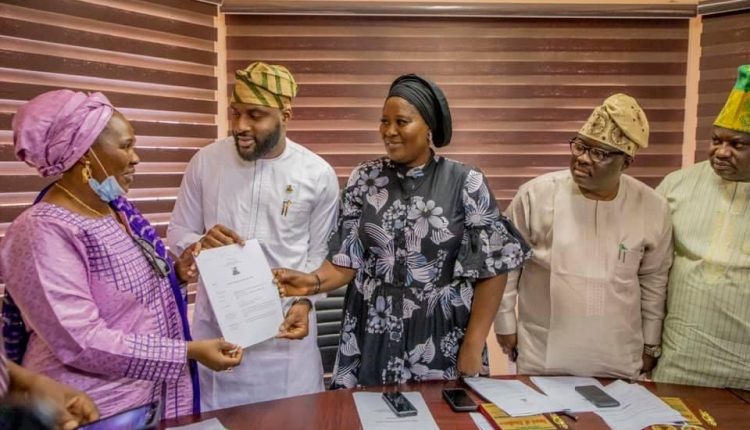 …presents Awards of Excellence to the Speaker,Hon Oladeji

The Veterinary Council of Nigeria has lauded the 9th Oyo State House of Assembly for its consideration and passage of Dogs (Amendment) Bill, 2019.

This is just as the Oyo State Chapter of the Association presented Award of Excellence to the Speaker, Oyo State House of Assembly, Hon Adebo Ogundoyin for his outstanding performance and to Hon Olawumi Oladeji (Ogbomoso North) for sponsoring the Dogs Amendment Bill.

The commendation came from the President, Veterinary Council of Nigeria, AIG Aishatu Abubakar when she led other members on a courtesy visit to the leadership of the Oyo State House of Assembly.

The President of the Council said the Dogs Amendment Law was imperative in order to control and reduce the transmission of communicable diseases like Parvovirus, Hepatitis, Leptoftirosis and Rabies especially from unvaccinated dogs.

AIG Aishatu Abubakar said the Veterinary Council of Nigeria could not thank the Oyo State House of Assembly enough as the Law will make all dog owners responsible for keeping their animals and preventing them from straying and attacking people.

The Speaker, Oyo State House of Assembly, Hon Adebo Ogundoyin said the Dogs Amendment Bill, 2019 was among the seventy-three bills already passed by the 9th Oyo Assembly and assented to by Governor Seyi Makinde.

” We have set good record and we’ll still set more records in the 9th Oyo State House of Assembly. Dogs Amendment Bill is one the Bills passed by us in two years and this has made us to surpass the records of the last Oyo Assembly.”
The Speaker said.

Hon Ogundoyin stated further that the Law would have positive impact in the lives of the residents of Oyo State as it is aimed at protecting them from dog attacks, and also give adequate treatment and compensation to anyone bitten by dogs.

While responding, Hon Olawumi Oladeji (Ogbomoso North) explained that she sponsored the bill because of the prevalent incidents of dog bites and attacks among residents of Oyo State.

She added “A fine of #200,000 or six months imprisonment or both for any dog owner who fails to vaccinate his/her dogs against communicable diseases hence we call on all the Stakeholders to sensitize members of the public on the provisions of the Amendment”.

Recall that, the Dogs Amendment Bill, 2019 was assented to by Governor Seyi Makinde on the 22nd of September, 2020.

Why I Didn’t Attend Reconciliation Meeting With Gov. Makinde At Governor’s House – Olopoeyan