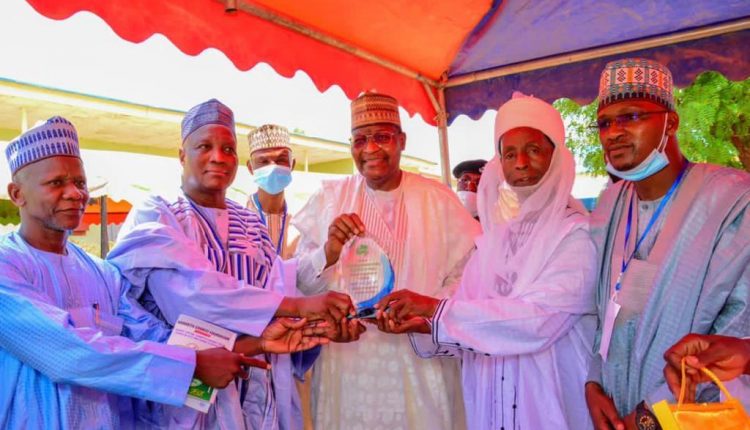 Traditional rulers and concerned community leaders have commended the Executive Vice Chairman and Chief Executive Officer of the Nigerian Communications Commission (NCC), Prof. Umar Garba Danbatta for his role in boosting security and supporting other initiatives aimed at developing Danbatta Local Government Area, Kano State and its environs, as well as his efforts toward national development.

The traditional rulers and the community leaders spoke at an event organised by Danbatta (Community) Charity Foundation (DCF) in conjunction with four other organisations including Zauren Tuntuba, a non-for-profit organisation; Danbatta Academic Forum (DAF); Danbatta Reporters and Duniya Ba Hutu, in Danbatta community, Kano at the weekend.

The event was the graduation ceremony of 10 female students from Muslim Community College of Health Sciences and Technology, Funtua and another 20 empowered females in vocational training focused on tailoring and fashion, all of whom were sponsored by Prof. Danbatta.

The event, which featured the provision of sewing machines and other fashion tools to the two sets of graduands, also saw Prof. Danbatta being conferred with a special recognition award for his immense contribution to the security of Danbatta community, among other community development initiatives.

Speaking for traditional rulers, the Sarkin Bai of Bichi Emirate and District Head of Danbatta, Alhaji Isiyaku Wada Waziri, stated that, “one of the most important things anybody can give to Nigerians presently is security because without security, no business will prosper and people will not live in peace,” adding that “That is why, among all the efforts that Prof Danbatta has made to support the community, his support in the areas of security is valued the highest.”

He emphasised that the local community had witnessed improvement in its security efforts following personal security support received from Prof. Danbatta. “Danbatta has been at the forefront of supporting the community in the area of security by sponsoring vigilante groups and financing all aspects of security planning in the local government area and these efforts have continually yielded positive results.” Waziri said.

He further urged Prof. Danbatta not to relent in his philanthropic gesture of helping the community and acknowledged the critical role which the Danbatta-led NCC is playing in leveraging the use of Information and Communication Technology (ICT), through the Emergency Communication Centres (ECCs) which NCC is implementing across the country, in enhancing security of lives and property in the country.

In the same vein, one of the leaders of the community and Chairman of DCF, Alhaji Nasiru Danguda, spoke glowingly by reeling out various initiatives by Prof. Danbatta towards contributing to the overall development of the community.

Responding, the EVC thanked the Foundation, its partners as well as the community leaders for recognizing his modest contributions to the development of the Danbatta and neighbouring community, saying “this gesture can only encourage us to do more for our community.”