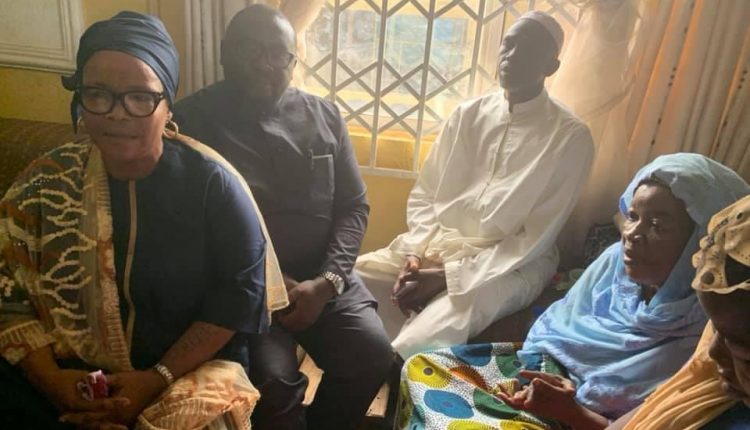 Former Deputy Governor of the Central Bank of Nigeria, Chief Adebayo Adelabu has called for proper investigation into the circumstances surrounding the gruesome killing of a promising young man in his prime, Late Mr Rahmon Azeez and ensure the killers are brought to book. This according to Chief Adelabu will serve as a deterrent to some criminals in position of powers whose main pre-occupation is to perpetrate evil and criminal acts in Oyo state.

The 2019 Governorship Candidate of All Progressives Congress stated this during his visit to the family of Late Rahmon Azeez who was killed during the recent fracas at Iwo Road area of Ibadan in Oyo state.

In a released message made available to journalists by one of Chief Adelabu’s Media Aides, Comrade Femi Awogboro, he described the incident as unfortunate which calls for pragmatic approach in the security architecture of the state as he has always echoed since the commencement of this administration.

Chief Adebayo Adelabu who was the  Chairman of the Security Trust Fund under late Senator Abiola Ajimobi led Administration attributed the spate of killings in Oyo state to security lapses which deserves urgent attention by the state government and all relevant stakeholders.

“Except we want to deceive ourselves, the security situation in Oyo state is worrisome under this government and people can not comfortably sleep with their two eyes closed. I urged the Government of Oyo state to leverage on the method and ideas used by the immediate past administration to bring back peace to the state and stop handling security issues with levity going forward.

“I came here to sympathise with the family because I knew late Rahmon Azeez very well before his demise. He used to come to my foundation/campaign office at Jericho and we worked together during the last election, together with his elder brother, Hammed but God knows best on why he allowed this to happen to him. I can confortably tell you that they have killed an active APC member and this is deliberate. We are not politicising this but it is a statement of fact given the role this family played in our favour during the last election. Rahmon was a strong supporter of Adelabu and Ultra. We are sure this did not go down well with the opposition. This is politics of bitterness and this victimisation must stop”, Adelabu said.

Chief Adebayo Adelabu said that during the eight years administration under the former Governor Abiola Ajimobi which he was priviledged to be the Chairman of the Security Trust Fund, crime rate was low. The potency of the security strategy of any government largely depends on the tone from the top, that is, the body language of the government leadership. The moment you imposed an Ex-convict as the leader of a governement agency, the Park Management System (PMS), this is what we should ordinarily expect. But, we will not allow this to continue.”, Adelabu added.

Agba Akin Parakoyi of Ibadanland suggested that a foundation should be established to honour the easy going Rahmon Azeez tagged RTF (Rahman Twins Foundation ) with a promise of donating reasonable amount to kick start it. This will ensure there is a special fund to take care of the twins and the wife Rahmon left behind and fund their education up to the University level. He promised to donate the base money for the seed fund while other well meaning indigen of Oyo state can add to it.

He prayed to God to grant the family of the departed deceased the fortitude and the strength to bear the irreparable loss as well as put a stop to incessant killings in the state.

Recall that Rahmon Azeez was murdered on last week wednesday by the suspected members of the Park Management System established by the Oyo state government under Governor Seyi Makinde.