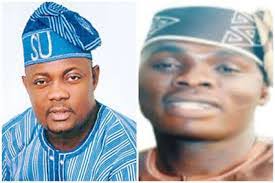 The arrest of Hon. Wasiu Olafisoye Akinmoyede was reported to be in connection to political rivalry with Hon. Olatoye Temitope Sugar.

Speaking on the arrest, the speaker of the House of Assembly, Olagunju Ojo, confirmed the arrest. He said the House was notified through a letter.

Few years back, the dead and the arrested are a very close political ally with robust political relationship. It was confirmed Hon. Olafisoye while in ACN masterminded the defection of Hon. Sugar from Accord party where he was elected as Lagelu state assembly memeber to ACN which changed name to APC.

The ending political rivalry emanated as soon as Hon. Sugar got denied of APC senatorial ticket and defeated to ADP. The Lagelu political scene gets rumbles daily as both tends to claim a boss in Lagelu local government which belongs to both Hon. Lafisoye and Hon. late Temitope Sugar.