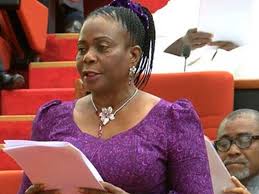 Immediate past members of the House of Representatives who are members of the People’s Democratic Party (PDP) from Ekiti State have told the Senator representing Ekiti South, Biodun Olujimi to rather defect to the All Progressives Congress (APC) instead of going about threatening to decamp, saying; “we have already taken samba and tambourine, poping champagne to celebrate her defection.”

The former Rep members, Segun Adekola, Thaddeus Aina, Ayo Oladimeji and Kehinde Agboola, said it was not hidden that Senator Olujimi was working for Governor Kayode Fayemi and APC in Ekiti State and it will be better for her to make her membership of APC formal.

They said; “Her defection will be a thing of joy to us in Ekiti PDP and lovers of the party in the state cannot wait to read the breaking news on her long overdue official movement to APC.

“To us, no news can be more exciting than for Olujimi to make do her threat to exit the party for APC to which she is already a member by her actions and inactions.

“Recall that some of her followers were recently appointment by Governor Fayemi and she had severally claimed boastfully that the governor supported her tribunal matters against Prince Dapo Adeyeye.

“It is also on record that during the Covid-19 lockdown, she took food items to APC local government secretariats for distribution to members of the party across the State.

“Here is someone who has caused the party so much needless stress and we assure her that her final exit will be celebrated.

“We also wish to assure her that like others before her, Olujimi will go to APC alone and her formal exit your exit can only be inglorious.

“We pray she leaves even today, so that we can gladly say good riddance to her bad rubbish.”