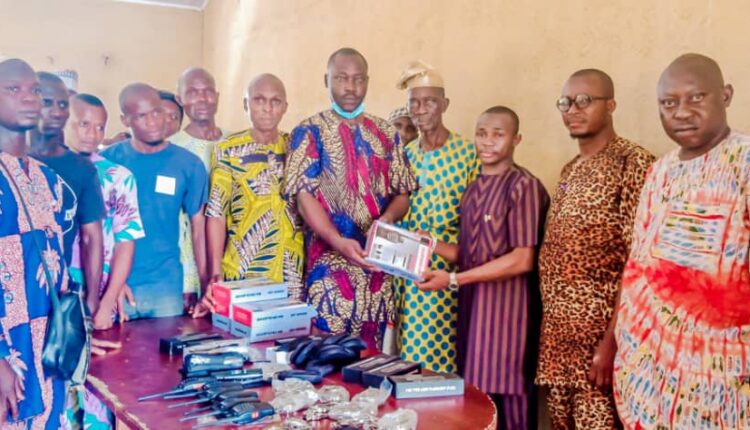 This was made known in a press release by the S.A media and publicity, mr bodija akinwale, to the press today in ibadan.

Twenty-five of walking talkie, fifteen handcuffs, five shocker touch lights, and uniform outfits are part of the crime-fighting equipment donated by the chairman, on Wednesday, by the Ibadan North local government to strengthen security responses across the local government entity.

The executive chairman, hon. Yusuff Sahib Oladayo, who presented the security equipments before the heads of administrations in the council, Engr. Babatunde AJO who is the head of local government administration (HLGA) and Mrs. Mosun Oyewale (Director of Administration and general services) handed over the gadgets to the Commandant Adetoro Akeem (Akolab), for the use of the Ibadan North Security Patrol Team.

Agba Egbe said the equipment would go a long way in boosting the morale of the security outfit and enhance their capacity to fight crime and combat criminality. Also noting that he will never be a partaker or encourager of crime and anyone found guilty should be brought to book irrespective of status or connection.

He said: “No society can survive without a motivated and well-equipped security force. Hoodlums and criminals know this, hence the relentless attacks. It is our responsibility as Government to ensure that criminals’ nefarious aims are not achieved. They seek to demoralize and destabilize the security agencies and other law enforcement agents, but we will continue to boldly proclaim, ‘Not on our watch.

The head of local government administration, Engr. Babatunde AJO in his words said regardless of whatever challenges the security outfit might be facing now or in the past, they should be rest assured that the present chairman of the local government and himself will continually see to every necessity that needs to be done.

In his response, the commandant of the Ibadan north security patrol team, Adetoro Akeem said he is excited about the turnaround patterning security welfare and provisions since the emergence of hon. yusuff sahib oladayo as the council chairman and he prays God will continue to protect and give him more resources to empower more towards the team.