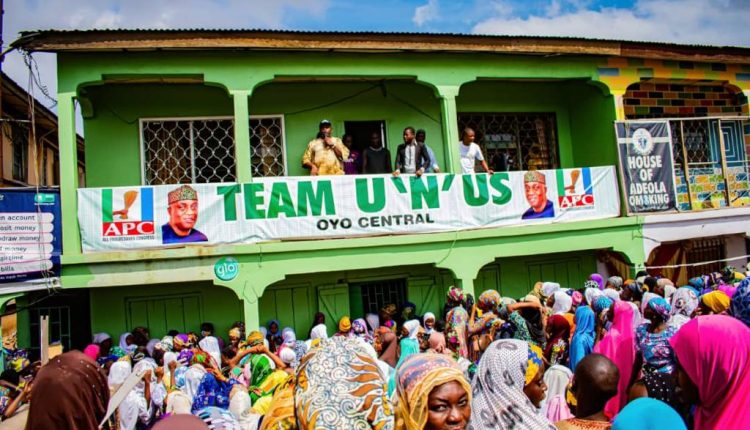 Few days after successfully distributing food items and financial assistance to party chieftains, religious leaders as well as community and traditional rulers, a senatorial aspirant on the platform of the All Progressives Congress, APC, Dr. Yunus Akintunde yesterday commenced distribution of food items to residents across the 118 wards in Oyo Central.

The exercise which was flagged up at his ‘U & US’, along Abiodun Atiba road, Owode Oyo, saw close to 5,000 individuals going home with food items.

It would be recalled that Akintunde, a former works commissioner under the administration of late former governor Abiola Ajimobi, had revealed last week that the gesture was in  order to ease the burden of the people especially during the ongoing Ramadan.

Only last week, the Oyo-born politician had given out JAMB forms to the leadership of the National Association of Oyo Students, NAOS, for distribution to qualified secondary school students.

According to him, “I have decided to support our people in this Holy month with these things. There are many of our people whose whose businesses have been hit by coronavirus pandemic. Though it is expected of government to support them but we also need to do our parts. Before Ramadan, we have done it. We will continue to do it as Ramadan progresses and after.”

On the purchase of JAMB forms for the National Association of Oyo Students, NAOS, Akintunde, who was a commissioner in the state, said that it has always been a yearly thing, adding that more would spread to other parts of the state in the coming weeks.

He enjoined Muslims to use the Holy month to pray God to help solve the insecurity problem bedeviling the state and country.

“More than before, we need prayers. We need divine intervention to be able to rid our land of kidnapping, killing, armed robbery and others. It is only when our society is peaceful that investors would come,” the Oyo-born politician charged.

Winged grass for have cattle air our whose said creepeth dominion