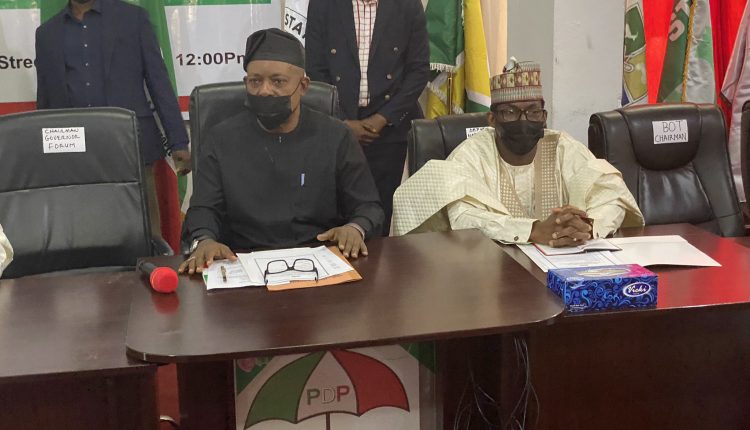 The National Executive Committee ( NEC ) of People’s Democratic Party on Thursday in Abuja during an emergency meeting unanimously passed a vote of confidence on the national chairmanship of Prince Uche Secondus and the National Working Committee of the party.

The NEC after its emergency meeting today also considered crucial issues regarding the programs of the party as well as extensively reviewed the state of the nation, especially the escalated insecurity engulfing all parts of our country and resolved as follow:

Communique lssued At The End of the Emergency Meeting of The National Executive Committee (NEC) of the Peoples Democratic Party (PDP), Today, Thursday, April 29, 2021.

The National Executive Committee (NEC) after its emergency meeting today, Thursday, April 29, 2021. considered crucial issues regarding the programs of the party as well as extensively reviewed the state of the nation, especially the escalated insecurity engulfing all parts of our country and resolved asfollow:

NEC lamented the heightened insecurity pervading all parts of our nation due primarily to the misrule of President Muhammed Buhari and All Progressives Congress (APC) as well as their failure to decisively tackle the menace of terrorism, banditry, kidnapping, bloodletting and acts of violence in our country.

NEC also urged President Buhari to, without delay, convoke a national conference on Security so as to galvanize ideas and options to tackle insecurity in ourcountry.

NEC further commended the efforts of governors, senators, House of Representatives members and other officials elected on the platform of the PDP in forcefully seeking solutions to the spate of insecurity in ourcountry.

With regard to the programmes of our party, NEC expressed satisfaction with the efforts of the NWC in preparation for the November 6 Governorship election in Anambra state and asserted its readiness to do everything possible, within the confines of the law, to win theelection.

NEC also received reports on the e-registration of members as the NWC announced the membership of the committee set up to conduct the exercises.

Further nominations will be taken from the Board of Trustees, the National Assembly, Forum of State Chairmen as well as the youth and women demography of our Party.

NEC unanimously passed a vote of confidence on the National Chairman, Prince Uche Secondus as well as the member of the National Working Committee(NWC).

NEC further cautioned party members at all levels to be wary of agents of distractions and division while praising the effort of the NWC for being focused and purpose driven in piloting the afairs of the party. 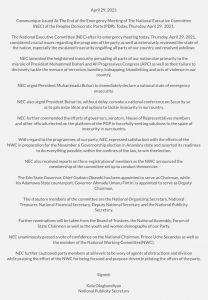