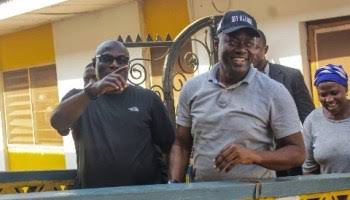 PDP Might Not Be Re-Elected In Oyo State In 2023 – Alh. Bisi Olopoeyan

A People’s Democratic Party Chieftain in Oyo state, Alhaji Bisi Olopoeyan has lamented the neglect of Party members by Oyo state governor and PDP politically elected officers, said aggrieving party members will not work for their reelection in 2023.

” our governor has used and dumped the party and it members, he was running after us before and during the campaign, now he and his people had started administration but shed our party to carcass, not taking care of the platform he used to win the election anymore.

Yes, he has killed Oyo PDP, no PDP Chieftains and core members remain loyal to the party again, some had gone silence while many had deserted Molete, the party secretariat to government Secretariat, to lobby for appointment, whereas it is our administration, government should be the one to be going after party members in their respective wards and local governments.

Alhaji Olopoeyan also berated the hide and seek of other elected officers like; state assembly members, federal House of Representatives members and Senator under People’s Democratic party, he said many of them reaped where they did not sowed. ” it is not only our governor that neglected the party members, also our state and federal lawmakers. Immediately they got to power, they forget those who laboured hard for their victory, when it was raining and shining, they had forgotten that there were some faithful people who went through thick and thin to campaign for them, now they are living big collecting fat salaries but hardly care for the welfare of the party members that sacrificed own blood for their Victory” he added.

As a party chieftain, Olopoeyan said he has started consulting real party stakeholders in the state for reconciliation ahead of the next party congress which is likely to hold by November 2021.

” We have been sidelined, party members are not happy, me, am also not happy, those who aligned with the government are suffering and smiling fellows, those running government with our governor are hungry, we can’t wait till everything damaged beyond repair, I had started reconciliation meetings with the aggrieved members ahead of congress.”

Olopoeyan added that, governor Seyi Makinde begins to miss the road as soon as he started entrusting Tom, Dick and Harry into administration they didn’t know anything about it election victory. A
victory that a set of people laboured for, he dumped those people he used for campaign and election to unbraced untrusted hands.

The State PDP Chieftain Also frown at Makinde attitude towards political parties that help him win the election, said all the political parties involved during the coalition should be the one to be in government but opposite is the case, he confirmed that the governor did not fulfill agreement made when forming the coalition with ZLP, ADC, SDP and others. Olopoeyan affirmed that, if not for the coalition parties, PDP could have lost the governorship election and many of the Assembly seats.

Makinde Leads Ilaka, Agboola Others To Unveil An Ultra-Modern Business Complex In Ibadan

Seyi Makinde’s One Year Of Motion Without Movement | Ademola Solalu

I remain a member of the PDP, says Ekweremadu