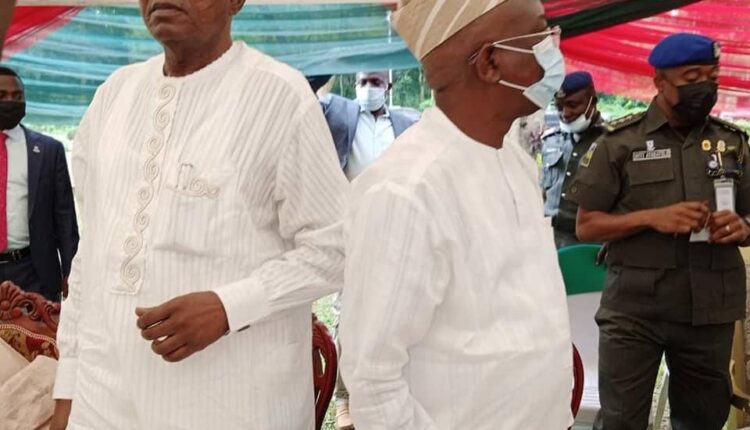 Immediate past state chairman of People’s Democratic Party in Oyo state, Alhaji Kunmi Mustapha  said the caucus meeting invitation was send out to all aggrieved party leaders in the state but all decided to declined the invitation because of their selfish interest.

He said, the aggrieved leaders were also invited to the state caucus meeting but, he doesn’t understand reason why all of them decided to not to attend the meeting.

Added that, thou, he was not surprised when they were not seen at the just concluded caucus meeting because some of the expected aggrieved leaders also boycotted a reconciliation meeting organized by former senate president, Senator Bukola Saraki four weeks ago.

In their separate reactions, the aggrieved leaders denied been invited to any caucus meeting by Alhaji Kunmi Mustapha.

Arole’ Ileba, Nureni Akanbi “ I never received invitation to any PDP caucus meeting, was not called nor invited to their meeting. The last time governor Seyi Makinde called me this year  was after Bukola Saraki came for reconciliation meeting, he called me second day and said he just want to greet me that will call me back when he reach Ibadan from Abuja” . Nureni Akanbi stated

“ Alhaji Wasiu Adeleke sent me a message, invited me to a PDP caucus meeting, but later sent another message, asking me to disregard the invitation that, it was sent to me in error, said there was a mix up in the invitation sent earlier that the meeting is strictly for State Caucus as it is enshrined in the party’s constitution “ Oyo state Assembly former Majority leader, Hon. Michael Okunlade.

In his own reaction, Alhaji Bisi Olopoeyan said Kunmi Mustapha statement has shown  he is a seria liar.

“ You need to reinterview him to tell you who and who he sent meeting invitation to, even then as the state party chairman who knows there is crisis in the party, ask him the personal efforts he made to reconcile aggrieved side, he only act as directed.

“ Yes, I didn’t attended meeting held with Senator Bukola Saraki at the state house because, the aggrieved leaders had earlier met with the reconciliation committee headed by Dr. Bukola Saraki in the morning at Carton Gate Hotel, so some of us decided not to meet again with  governor Makinde for afternoon meeting because, it not necessary again, we had met the committee and made our stand known, that all.

Also, one of the aggrieved leaders from Ogbomoso, Elder Mathew Abioye who spoke with westerndailynews on phone said he didn’t received any message concerning the held caucus meeting. hinted that, he invitation was circulated within other faction.

Pa’ Elisa Olanrewaju while responding to Kunmi Mustapha statement about invitation to a meeting message sent to aggrieved leaders, the Oyo PDP leader from Oke Ogun said, neither him nor other aggrieved leaders from his zone received their message inviting them to a caucus meeting, said Alhaji Kunmi Mustapha need to get his information right and be factual  when addressing the press.