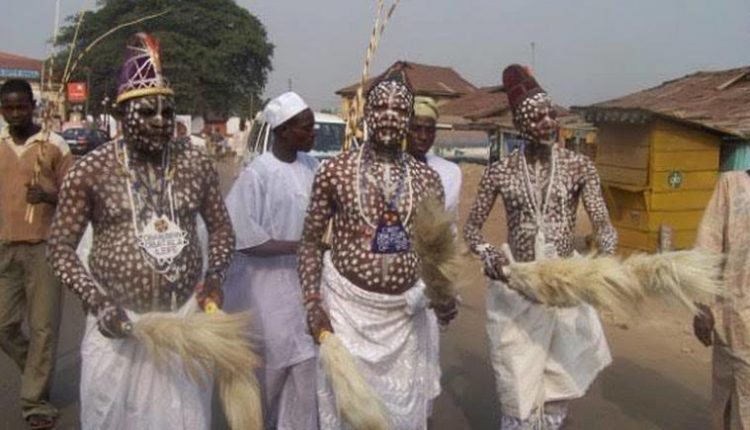 Members of the Traditional Worshippers Association of Nigeria, Oyo State Chapter, have protested against the exclusion of the group from a peace meeting called by the Oyo State government to discuss issues relating to the maintenance of peace in the state.

http://www.pigeons-france.com/nbmbhpf Key stakeholders like traditional rulers, religious leaders, security agents, artisans, market women, and men, students’ bodies, among others, were invited to the Agodi Secretariat in Ibadan on Monday and Tuesday of the week but the traditional religion adherents were not among those invited for the meeting.

http://tuvillanueva.com/jey96jb The group, in a statement signed by its General Secretary, Dr. Fayemi Fakayode, on Wednesday after an emergency meeting in Ibadan, said that it was not the first time the third leg of the religious beliefs were neglected and omitted from core issues that affect the state.

https://paceptclinic.com/9saop4xt8ec The traditionalists also commiserated with the police authority in the state over the sad loss of officers to the last violent protests in the state, as well as the destruction of police stations and facilities.

https://www.social360monitoring.com/zkhlk1h8g Fakayode said: “We would not have been worried by the attitude of this administration to the traditional worshippers in the state as other issues of equal importance had been discussed herein Ibadan with the inclusion of our brothers and sisters in the Christianity and Islamic faith, but on the issue of peace and security, one would think it is supposed to be all-inclusive.

https://superleathershop.com/bg78gppx79 “The governor has continued to treat us like we are aliens in our own land just because of our belief. We need to remind him that we hold the same stake in the affairs of this state and we will keep reminding him.

“We are using this medium to also commiserate with the police authority in the state for the loss of its officers to the last violent protests in major areas of the state, as well as loss of equipment and facilities and vandalisation of police stations in many areas. It is disheartening.

https://www.passion-outlet.com/jveb5lf81vu “We call on the federal, state, and local council authorities to urgently commence renovation work on these facilities across the state.”

http://grasshoppersoccer.com.au/frxs7sv9 The traditional worshippers have, however, commended Governor Seyi Makinde for the announcement made on Tuesday that he had signed a document for the immediate recruitment of 1,500 officers to kick-start the South-West Security Network, code-named Amotekun Corps, in the state.

https://phisiobasic.com/rk19tygkwq3 They said the Amotekun Corps would complement the efforts of the regular police officers to enforce law and order, especially in the rural communities.