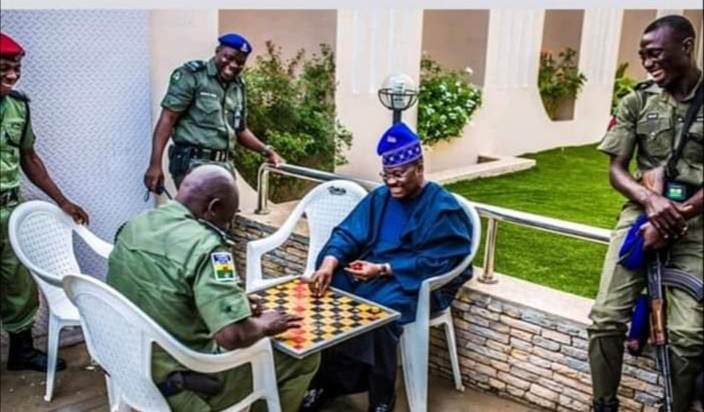 A popular Islamic Cleric and Preacher, Sheik Ajani Bello had said it might take up to fifty years to have another Governor in the mould of Late Governor Abiola Ajimobi.

The cleric who lash out at people for only coming out to sing the praise of the deceased Governor after his death said such hypocrisy will attract judgement and punishment from the Almighty Allah.

Sheik Bello spoke in his sermon during the 8th Day Fidau prayer in honour of late Ajimobi at an event which held at the Oluyole, Ibadan residence of the former Governor.

The scholar who was accompanied by other notable Islamic scholars and cleric in leading series of prayers for the repose of the soul of the deceased recounted the various encounters he had with the Governor and where he (Ajimobi) had emphasis how he long to break the family jinx of living beyond 70years.

Bello in his short sermon said “It will take like 50years to see another person like Ajimobi in Oyo State. He has lived his life as a lesson for us all to learn from.

“Many times, he didn’t hide his secret prayers of how we wants to live for 70yeas and atleast break that jinx in his family because he always say no one has ever crossed the 70years threshold in his family.

“I remember even the last time we attend a program together, he still said it that his father died just two months to his 70th birthday and that he always pray to God to let him cross the 70 and God granted his prayers.

“Ajimobi is gone. It is left for us all to live out lives. He desired to build a mosque for God and God granted him. I think Ajimobi is a special human being. A lot of things we said while he was alive are just becoming clearer to me after his death.

“Human beings are always funny. We are ungrateful people. We must learn to praise people when they do well, so that they can do more and be encouraged.

“Many people singing his praise after his death will be punished before God because many never praised or acknowledge his good deeds while he was alive. Yes, all human must taste death and everyone of us will die, so there is no need to mock anyone. I am sure Ajimobi completed all he came to do on earth and he is a good man.”

He also appealed to the widow to take good care of the children left behind by the Governor noting that the Ajimobi he knew doesn’t tolerate nonsense from any child. He also appeal to the extended family of the deceased not to be distance from the wife and children as a way of promoting and sustaining the legacies left behind by the former Governor.

While leading prayers for the wife and children of the deceased, the Chairman, Muslim Community of Oyo State, Alhaji Kunle Sanni said the late Governor would be remembered for been just and fair to both Islamic and Christianity in the state.

He said the Governor, though not the first Muslim Governor to serve in the state used his office to promote Islam and ensure that all the requests amd perceived injustice against the muslims were corrected, saying his efforts earned him the award of the Most Fair and Just Governor in the history of the state.

Sanni added that the record of the Ajimobi as the Governor is a big encouragement for all the Muslim community as he represented them well as good ambassador while in office.

The event was attended by close family members, included the widow, Mrs Florence Ajimobi, their children and spouses, and political associates who were made to sit in observance of the social distancing directive of the NCDC.

In his vote of thanks, son of the former Governor Mr Idris Bolaji Ajimobi said the family has experienced a great loss that would be difficult to fill.

He thanked all the participants for the support to the family at this trying period, assuring that the children will always continue to uphold the living memory of their father, whose death still remain a shock to the family.

Highpoint of the event was the hundreds of people who were locked outside of the residence gate and who were not allowed into the venue of the prayers.

Oyo ZLP Throws Wrong Banters At Gov. Makinde Says He Is An…

Another N2b Loan: Be Wise, Don’t Join Makinde To Plug…