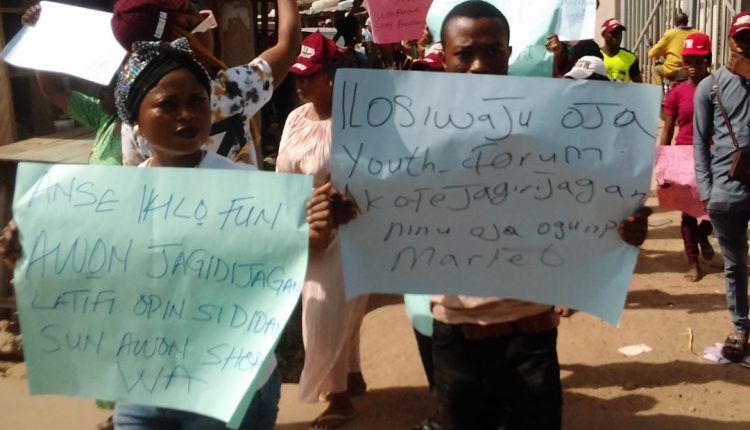 Insecurity : Traders In Ibadan Protest Over Incessant Burning, Looting Of Shops By Hoodlums

Traders at Ogbeni-Ogunpa market and other adjoining markets in Ibadan, Oyo state have called for provision of a vibrant security network in the markets.

The traders made this known during a peaceful protest around some markets to express their grievances over incessant burning and looting of their shops by suspected hoodlums.

According to the Chairman, Agbeni-Ogunpa Market Youth forum, Mr. Isiak Ademola, suspected hoodlums had looted shops in the markets about ten different occasions.

Mr. Ademola described as unfortunate that shops the suspected hoodlums were unable to be loot were torched.

Vice Chairman of the forum Mr Akilapa pointed out that traders at the markets had lost millions of Naira to the looters.

Two other protesters, Mrs Rukayat Feranmi and Miss Olabisi Salaudeen who were traders at the markets have been transacting business in fear of looting by the suspected hoodlums.

Mrs Feranmi and Miss Salaudeen added that some of those affected by the looting were yet to recover from the losses.