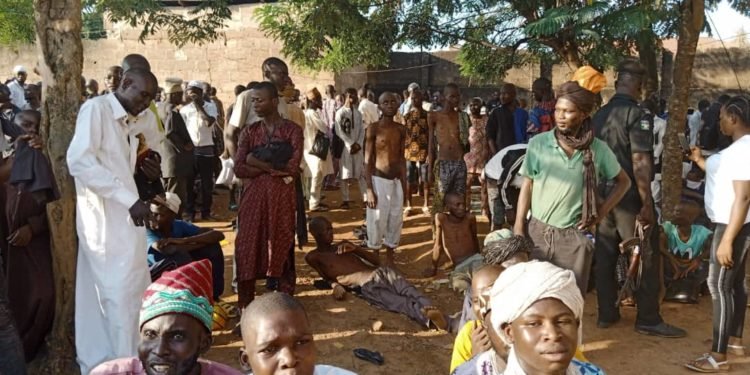 Oyo state Commissioner of Police, Shina Olukola on Monday confirmed the evacuation of 259 detainees from Illegal detention believed to running my the subjects of the late Islamic cleric in Ibadan, Alfa Olore.

Storming the illegal detention facility discovered by police in Ojoo Ibadan, Oyo State capital on Monday, CP Olukola said he and his team was surprise as such dungeon in Ibadan.

Olukolu said, “It is the responsibility of the Nigeria Police Force to protect life and property. This morning, November 4, (yesterday), I received a call via a young man, who informed one of my divisional police officers that there is an illegal detention facility somewhere at Owode, Apata in Ibadan, being run by someone, who claimed to have the powers to change the anti-social behaviours of youngsters and others.

“On the basis of that information, the police decided to check it out. We got to Owode, Apata. By the time we got there, they had evacuated that facility. But from the surroundings, we knew that there were people in that place earlier than the time we arrived.

“However, the young man informed the police that there is another detention facility and that is where we are now at Oloore, Ojoo area of Ibadan.

“Actually, when the police got here, we discovered that young men, young women are being kept in captivity in a dungeon-like situation. As a matter of fact, man’s inhumanity to man is being manifested in this environment. And we are not happy about the situation.

“So, we got across to the state government and state government officials are around. They are here with a view of ensuring that some of these young men that are kept against their will are liberated and allowed to be in a position where they can talk to themselves and take care of themselves.”

The rescue operation was witnessed by the state Commissioner for Women Affairs and Social Inclusion, Mrs Faosat Sanni who represented the state government.

The rescue operation was witnessed by the state Commissioner for Women Affairs and Social Inclusion, Mrs Faosat Sanni who represented the state government.

Just In : PDP NEC To Hold An Emergency Meeting Today In…